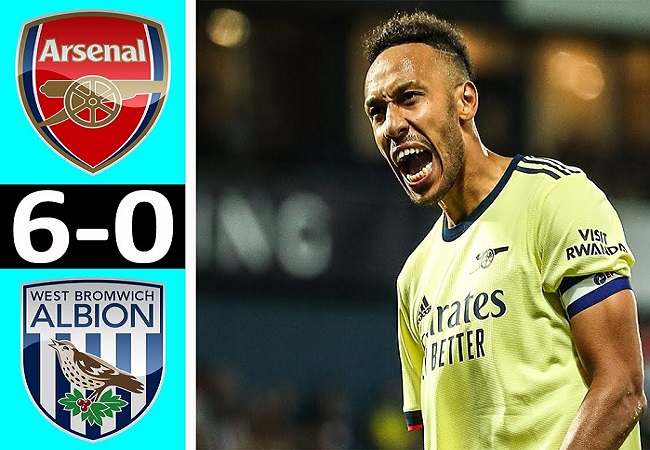 Arsenal thrashed West West in a Carabao Cup second round clash on Wednesday night. Arsenal captain Pierre-Emerick Aubameyang bagged a hat-trick in their 6-0 win. And Nigeria-eligible midfielder Miguel Azeez has congratulated the Gabonese striker after the victory.

No player of Nigerian descent was on parade at The Hawthorns, with Super Eagles center-back Semi Ajayi not selected to face his old club, while Folarin Balogun, Arthur Okonkwo and Azeez were neither in manager Mikel Arteta’s selection.

Aubameyang scored Arsenal’s first, second and fifth goals to go home with the match ball. And he provided the assist for the third goal that Nicolas Pepe netted.

Last night’s win gives breathing space to Arsenal who made a faltering start to the domestic season after losing two of their first two games in the Premier League.

“A bit of happiness. Thanks to the Fans That came and supported us.” Aubameyang posted on Instagram shortly after the game.

Replying to Aubameyang’s post, Azeez was in awe of the performance of the Gabon star. And he used emojis to express his feelings.

Azeez is making huge strides at Arsenal. The promising teenager trained with the first team in pre-season. And he has captained the U23s in their first two competitive matches of the new season.