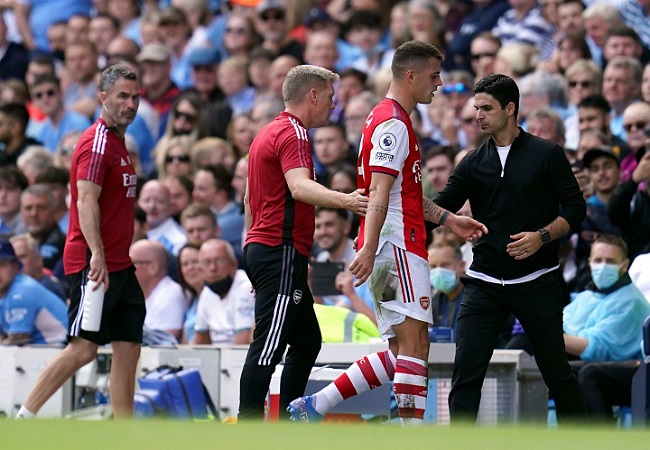 Arsenal continue miserably the season as the Gunners registered a new defeat. Arsenal suffered 5-0 loss to champions Manchester City at the Etihad Stadium this Saturday afternoon. It was their third consecutive game defeat in the Premier League.

A host of top names were missing for the Gunners, with Gabriel Magalhaes, Nicolas Pepe, Ben White, Thomas Partey, Hector Bellerin and Willian were not in the selection of manager Mikel Arteta due to fitness issues.

The Spanish football tactician named three goalkeepers in his matchday 20 as Bernd Leno started while Aaron Ramsdale and Arthur Okonkwo were on the substitutes bench.

It was the Anglo-Nigerian teenager’s first squad involvement for a Premier League match since joining Arsenal.

For the first time this season, Folarin Balogun didn’t taste action in the Premier League, having made his starting debut on the opening day at Brentford before coming off the bench in the loss to Chelsea.

Ilkay Gundogan opened the scoring in the 7th minute, four and a half minutes later Ferran Torres doubled the lead. And when Xhaka was sent off it was only a matter of time before City increased their lead again. And they did after Gabriel Jesus made it 3-0 two minutes before half-time.

In the 53rd minute, Rodri scored the pick of the bunch with a shot from outside the box. And Torres headed home to make it five with six minutes left on the clock.

Arsenal are rock bottom of the Premier League with no points from three games. And they have conceded nine goals without scoring heading into the international break.