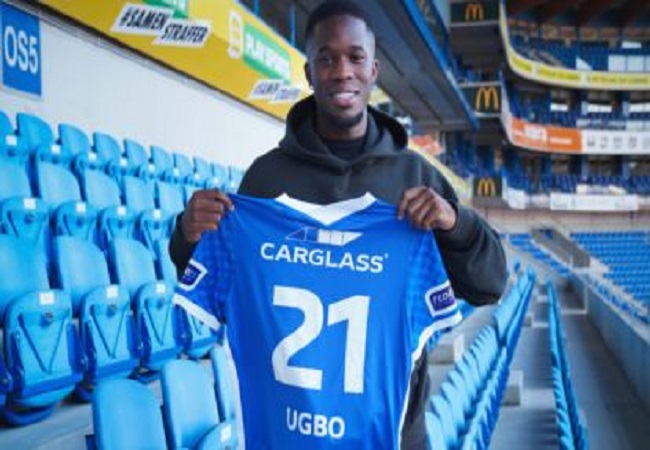 Brand new Racing Genk signing Ike Ugbo was presented to the media on Friday after completing his move to the Belgian Cup winners from Chelsea.

The Super Eagles hopeful made a splash in the Belgium First Division A last season. He helped modest Cercle Brugge beat the drop by scoring 16 goals in 32 league matches. And on the basis of those displays he was linked with a plethora of European clubs this summer before opting for Genk.

Manchester United star Edinson Cavani’s name came up as he answered a question on the striker he compares himself to.

The Uruguay international is a seasoned marksman. He scores goals wherever he goes, racking up 358 goals combined for Paris Saint-Germain, Napoli, Palermo and Manchester United.

“Who am I comparing myself to? Edinson Cavani. A striker who can score easily in one time, but who sometimes also needs half a chance to be effective“. Ugbo said in quotes relayed Voetbalkrant citing HLN.

Ugbo had never played in a top-flight European League until he arrived at Cercle Brugge last August.

“You should not forget that I only played at the highest level at Cercle Brugge last year. That is why I am convinced that this is the ideal step.” He added.

“I played against Genk twice last year and was very impressed. It’s a team that creates a lot of chances. And it must be my job to finish them.” He continued.

Ugbo is in contention to make his competitive debut for Genk when they take on Anderlecht in one of the games that matter in the Belgian First Division A on Sunday, August 29.