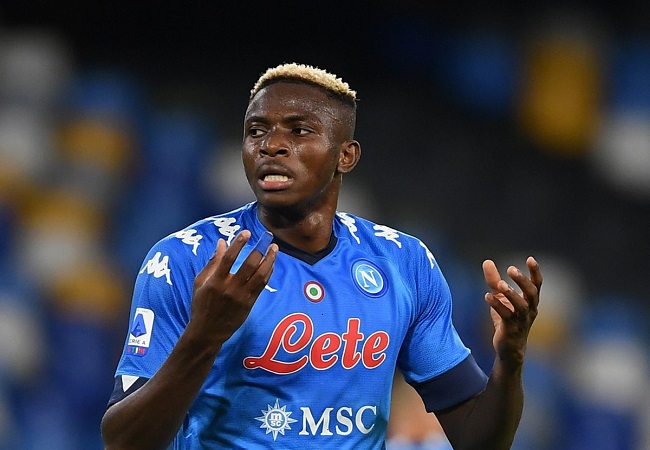 The Nigerian striker Victor Osimhen saw red card after 22 minutes into Napoli’s first match of the season. Osihmen thus leaf the team outnumbered for more than three-quarters of the tie against Venezia

Napoli goalkeeper Alex Meret has not spared the rod in correcting Victor Osimhen following the Nigerian forward’s dismissal in Napoli’s 2-0 defeat of Venezia on the opening weekend of the Italian Serie A.

Osimhen headed into the new campaign as Napoli’s leading striker and star attraction. Still, the Super Eagles star lasted for only 22 minutes before he was shown a straight red card for appearing to slap an opposing player.

Despite playing most of the encounter with ten men, I Partenopei managed to carve out a convincing victory over the newly-promoted side.

But the Italian football authorities later slapped Osimhen with a two-match ban for his indiscretion. The striker will thus be unavailable for the matchday two clash at Genoa on Sunday and the matchday three faceoff against Juventus on September 11.

It hurts to be without your best player for such crucial games. And Meret, a UEFA Euro 2020 winner with Italy, has ripped into his younger teammate for making mistakes that put his side in jeopardy.

“Victor knows he was wrong and hopes to not do it again in the future.” The 24-year-old shot-stopper told Radio Kiss Kiss, via Napoli Calcio.

“He put the team in trouble. These things can happen. But he must try not to fall back into the same mistakes.”

Manager Luciano Spalletti earlier cautioned Osimhen to tame his emotions as defenders in the Italian top-flight may now look to provoke ugly reactions.

Napoli are still looking to appeal Osimhen’s ban, though, so that the 22-year-old could be available for selection against the Old Ladies.