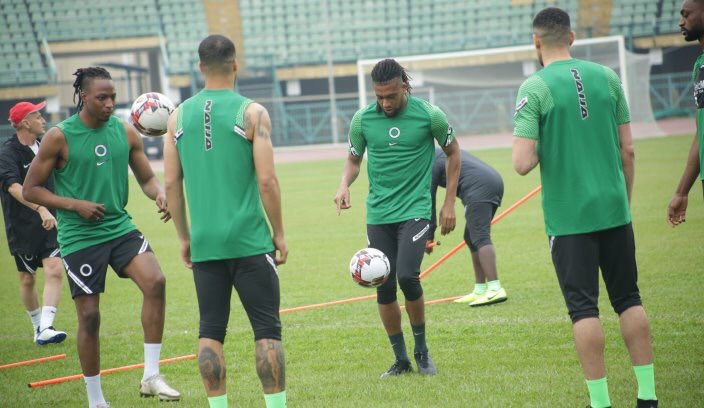 Akpeyi was later joined by Abia Warriors defender Adekunle Adeleke who was handed a late call by coach Gernot Rohr.

Also already in camp are the trio Alex Iwobi, Kelechi Iheanacho and Wilfred Ndidi who all arrived from England after helping their respective teams to victory in last week Premier League games.

Rohr is expecting more players to arrive today before the team will have it’s first training session at the Teslim Balogun Stadium.

Super Eagles Media Officer, Femi Raji, told africatopsports that some of the players could not make it to the Lagos camp, which opened on Sunday because of club engagements at the weekend.

He said, “Coach Gernot Rohr and other officials of the Super Eagles have been in Lagos preparing for the game.

“The few players that will make it early to camp are expected to train at the Eko Hotel gymnasium today.

“When all the players arrive in camp, the team will have their first workout at the Teslim Balogun Stadium on Tuesday.

“All hands are on deck to ensure Nigeria’s success in the match.”

Nigeria will open their Qatar 2022 World Cup qualifier against Liberia on Friday, September 3rd at the Teslim Balogun Stadium in Surulere, Lagos state.

Then they will travel to Cape Verde on Tuesday, September 7th, where players from the Spanish La Liga and Premier League will not make the trip due to UK COVID-19 regulations on red-list nations, which Cape Verde is listed.