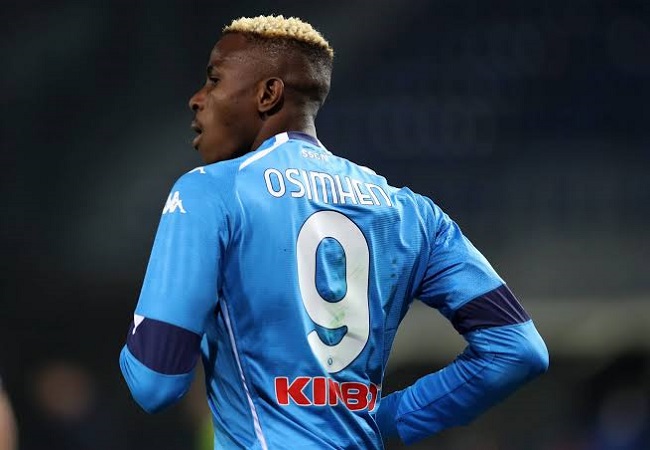 Victor Osimhen faced severe retributions from several quarters for his dismissal on the opening weekend of the league season. But the Nigerian international has escaped further sanctions from his club.

Napoli have decided against imposing a monetary fine on Victor Osimhen for earning himself a red card during the side’s Italian Serie A matchday one clash against newly-promoted Venezia.

The Super Eagles striker got into trouble after an altercation with an opposing player. And he was sent off barely 22 minutes into the match.

Despite playing a significant portion of the game with a man down, Napoli bailed themselves out of trouble as two second-half goals helped Luciano Spalletti’s men begin the campaign with a win.

The league authorities have since slammed Osimhen with a two-match ban and a fine of €50,000. The former Lille lad didn’t feature for the Parthenopeans in the 2-1 victory at Genoa last weekend.

Following condemnation from Osimhen’s manager and teammate, Napoli considered fining the 22-year-old. But according to Repubblica, as per Calcionews24, the Neapolitans have shelved that idea. But they have warned Osimhen and teammates that there will be repercussions for anyone who unwittingly leave the club in difficulty with their actions during matches.

Meanwhile, Napoli’s legal representative Mattia Grassani has confirmed that Osimhen’s two-match ban appeal has been filed to the appropriate quarters on the final day of August.

Grassani revealed to Calciomercato.com as per Calcio Napoli that the club’s legal team prepared a 22-page dossier that included videos and images of the red-card incident, expressing confidence in a positive outcome.

Napoli hope to have Osimhen’s two-match ban reduced to one so that the club’s record signing could be available for the crucial league match against Juventus after the international break.