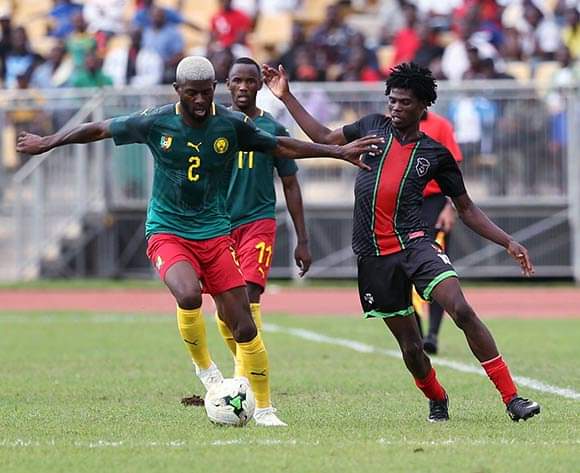 Cameroon strolled past Malawi after beating the Flames 2-0 at Olembe Stadium in Yaounde in the 2022 World Cup second round qualifying match on Friday evening.

Striker Vincent Aboubakar and Michel Ngadeuscored in the ninth and 23rd minutes for Cameroon to claim Group D top spot ahead of second and third placed Ivory Coast and Mozambique who drew 0-0 in an earlier match played in Maputo.

In scoring the first goal, Aboubakar got to the end of a long searching ball before volleying past exposed Malawi goalkeeper Ernest Kakhobwe.

Thereafter, Ngadeu added the second goal with a free header after Kakhobwe had misjudged the flight of a corner kick.

Ahead of the game, Malawi coach Meck Mwase had rung changes to his starting line-up while trying to be pragmatic against such powerful opposition.

Upfront, Richard Mbulu did not have the company of his striker partner Gabadinho Mhango who was relegated to the bench before he was introduced later on.

In midfield, winger Yamikani Chester returned after missing some five games and there was also a starting role for up-and-coming attacker Peter Banda.

Overall, Malawi have won once against Cameroon while losing four times and drawing thrice in all competitions.

The Flames registered their only win over the Indomitable Lions at the All-Africa Games in Kenya in 1987.

Cameroon have in the last six games of all competitions won twice, drawn and lost twice.

Malawi have failed to win their last six games in all competitions while losing four times and drawing the rest.

The Flames travel to South Africa to host Mozambique on September 7.

In an earlier match for the group played on Friday, Mozambique held Ivory Coast 0-0 in Maputo.