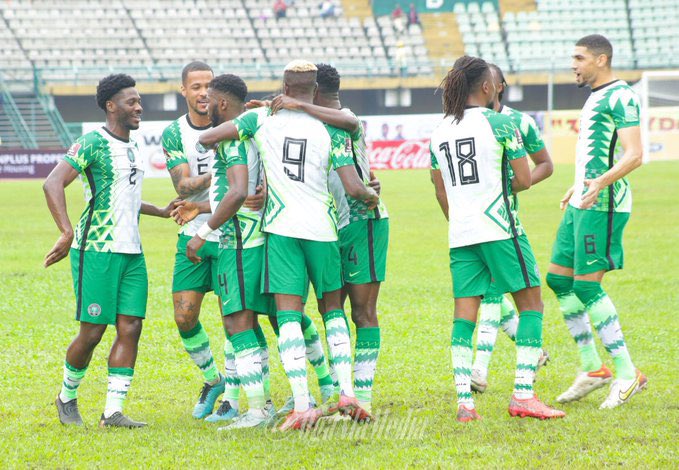 Kelechi Iheanacho’s brace helped Super Eagles to defeat Liberia 2-0 and got to a perfect start in the Qatar 2022 FIFA World Cup qualifiers on Friday at the Teslim Balogun Stadium.
A lacklustre match played in a soppy Teslim Balogun Stadium, saw the visitors looking to stand toe to toe with the Super Eagles.
However, the first attempt on goal came from Ola Aina who shot from a range in the 10th minute.
Joe Aribo almost gave Nigeria the lead five minutes later after he was set up by Alex Iwobi but he failed score.

Iheanacho broke the deadlock for the Super Eagles in the 22nd minute as he controlled a flicked ball from Iwobi inside the box before he turned and fired inside the net.

In the 37th minute, Victor Osimhen almost doubled Nigeria lead but his shot skewed off target.

Iwobi again assisted Iheanacho for the second goal on the stroke of half time to make it 2-0.

Nigeria in the second half had many chances to extend the lead but none was able to get inside the Liberia goal.

Osimhen thought he had scored as he connected well with a Moses Simon’s cross and headed the ball but Liberia goalkeeper denied the Napoli forward.

Iheanacho’s two first half goals was all Gernot Rohr’s men needed to get off to a good start in the quest for another World Cup outing come 2022 in Qatar.

The team will travel to Cape Verde to trade tackle with the Blue Shark on Tuesday in their second group game.