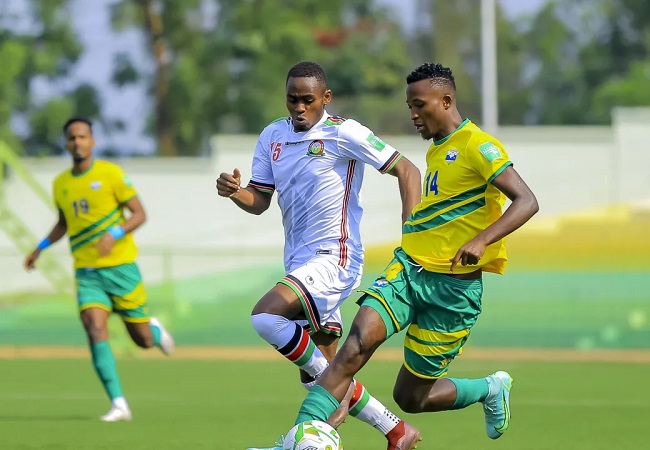 The draw meant Kenya temporarily go to second spot with two points, pending the tie between group leaders Mali and Uganda in Kampala on Monday.

Coming into the tie after a 0-0 draw at home against Uganda, Kenya looked to start the game better with an improved attacking acumen. They went into the lead in the ninth minute when Olunga rifled home from close range with his weaker right foot.

But, the home side which lost 1-0 away to Mali in the first game got back on level terms in the 21st minute. A cross from Haruna Niyonzima was headed goalward by Jacques Tuyisenge. However, it hit the back of Rwatubyaye, the ball changing direction and going past keeper Ian Otieno.

It turned out to be a closely contested tie and the only other real chance in the half came six minutes from the break. Masud Juma took a good run on the left before cutting back. But Eric Johannah slipped as he tried to adjust his body to take a shot.

In the second half Rwandese keeper Emery Mvuyekure who plays his club football in Kenya with league champions Tusker FC made a great save just a minute in, tipping Olunga’s brilliantly curled freekick behind for a corner.

Stars then made attacking changes to keep the tempo up, Abdallah Hassan coming on for Lawrence Juma.

In the 57th minute, Olunga should have surely buried the second for Kenya when he picked the ball brilliantly on the left, skipped past one marker before dummying the second. However, his final shot was way wide, just from the edge of the six yard box.

The lanky forward had another chance three minutes later when Daniel Sakari’s cross landed on him at the back post. But he bounced his connection just over.

In the 65th minute, Meddie Kagere who had come on as an early sub in the first half had a chance for Rwanda with a volley on the halfturn off a throw-in. But it went just wide.

With the clock ticking and a goal desperately needed, Kenya made another chance with Boniface Muchiri coming on for Johannah. The Tusker FC forward had a chance to score six minutes from time off a counter. But he was clipped from behind by Rwanda skipper Haruna Niyonzima.

From the resultant setpiece, Muchiri curled his effort wide. There was no change in score even with Kenya bringing on Henry Meja late on.

Uganda takes on Mali in the group’s other game on Monday.