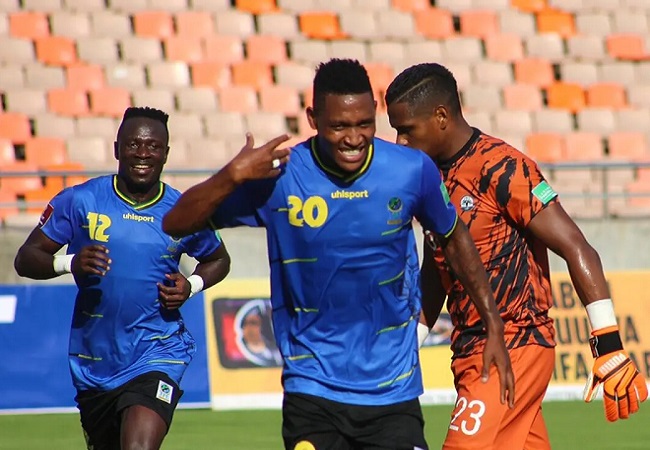 Tanzania came off the right end of a five-goal thriller, beating Madagascar 3-2 at the Benjamin Mkapa Stadium in Dar es Salaam to remain unbeaten. The Taifa Stars thus top Group J in the qualifiers for the Qatar 2022 FIFA World Cup.

Madagascar had come from two goals down to draw 2-2 at halftime. But they could not go all the way as Feisal Salum Abubakar scored the winner for the Tanzania seven minutes after the restart.

The result at home leaves Tanzania top of the group with four points, edging out Benin on goal difference while Madagascar’s Barea are without a point after back to back defeats.

Erasto Nyoni gave Tanzania a perfect start to the match, scoring from the penalty spot after the hosts were awarded a penalty inside the first minute of the game.

The home side had started the match on a high pace. And they commanded play for most of the opening exchanges. They went 2-0 up after 26 minutes when Novatus Dismas found the back of the net with a good individual effort.

The Under-20 star had won the ball 40 yards off before going on a solo run. Dancing into the box, he shot past the keeper.

But, the islanders halved the deficit 10 minutes later when Njiva Rakotoharimalala sneaked at the backpost to tap home a cross from the left. This goal thus gave Madagascar some hope of a comeback.

They completed the fight at the stroke of halftime in spectacular fashion. Thomas Fontaine stood behind a freekick before giving it a beautiful curl over the wall and into the top left of Aishi Manula’s goal.

Madagascar went into the break knowing they were in for a feisty second half and stood a chance to fight for maximum points from the game.

However, they were stunned seven minutes after the restart when Feisal slapped home Tanzania’s third after being picked out unmarked off a Mbwana Samatta cross.

Madagascar gave a fight to get back into the game. However their efforts came to nothing. Simon Msuva almost added a fourth late on. But he couldn’t keep his shot on target.