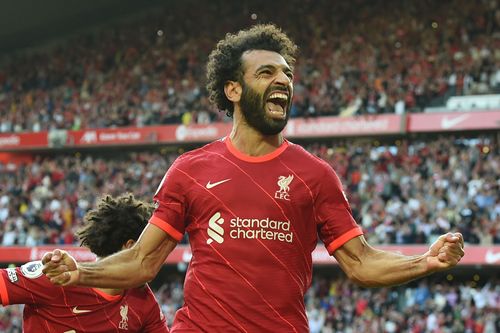 Mohamed Salah wrote his name into the golden book of Premier League history following his opener against Leeds United on Sunday afternoon.

The Egyptian winger was the one to give the lead for the Reds against the Peacocks at Elland Road.

Salah concluded a well-constructed action with a lovely assist of Trent Alexander-Arnold in the 20th minute to put Jurgen Klopp’s side ahead.

That goal is the 100th of Mohamed Salah in Premier League after just 162 appearances.

He joined players the likes of Wayne Rooney, Alan Shearer, Sergio Aguero, Harry Kane, Jamie Vardy and others to have reached that landmark in the English top-flight.

In addition, Mo Salah is the second African player to score 100 premier League goals after Ivory Coast’s Didier Drogba who bagged 104 goals in 254 appearances with Chelsea.