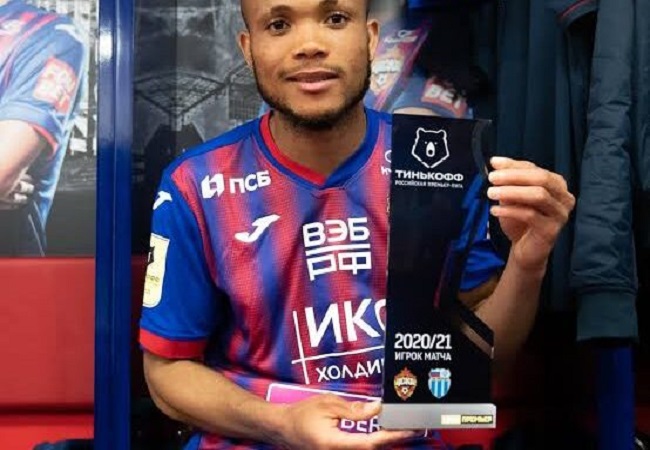 Super Eagles winger Chidera Ejuke has won the best player award for the month of August at Russian side CSKA Moscow. The winger has started the season brilliantly for the Russian top-flight side. And his performance has been rewarded.

The Nigerian striker has been a revelation at the CSKA Arena since he joined from Heerenveen in August 2020.

The 23-year-old scored five goals in 27 league appearances last season. And with just seven appearances this season, Ejuke has scored two goals and assisted one.

Ejuke put up outstanding performances in August, scoring twice to help CSKA Moscow secure two wins in four games. Albeit one of the goals was a consolation in a 2-1 defeat against Dynamo Moscow.

In a statement via the club website, the former Valerenga man beat Russian internationals Alan Dzagoev and Igor Akinfeev to win the prestigious award.

“The Nigerian won 44 per cent of the vote. The second was Alan Dzagoev, the third – Igor Akinfeev.” Read the statement.

Ejuke will hope that his performances will help to propel his side to the top of the Russian league, as they currently sit eighth on the log.