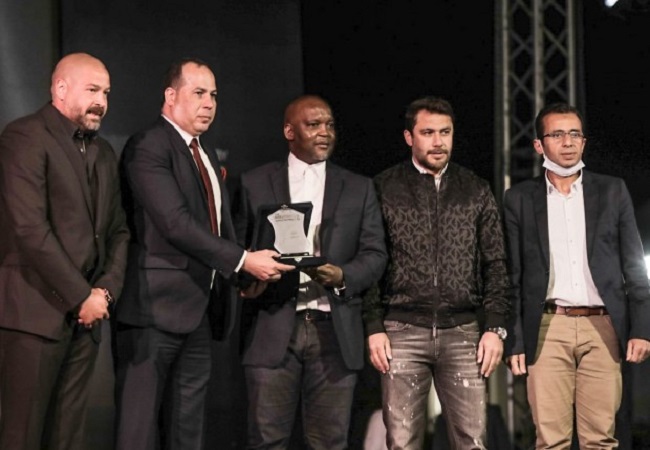 There was a special reward reserved for coach Pitso Mosimane and two others at Al Ahly’s glamorous celebration of their 10th star on Tuesday.

The glitzy event, hosted at the El Tetsh Stadium had a star-studded attendance list which included club legends, former board members, and several other high-profile sports figures, to witness the club’s celebrations as well as the unveiling of the club’s new logo.

A historic tenth star would not be possible without the man who masterminded it – Pitso Mosimane.

Jingles was instrumental in guiding the Red Eagles to their ninth and tenth CAF Champions League titles. The last of which came against Kaizer Chiefs who they swept aside 3-0 in Casablanca.

The trio received the club’s special currency from the man affectionately nicknamed ‘Bibo’.

It has been a successful 11 months in Cairo for Mosimane who thus far has managed to bag the Egyptian Premier League, two CAF Champions Leagues, the Egyptian Super Cup, CAF Super Cup as well as a bronze medal at the FIFA Club World Cup.

Mosimane will have another opportunity to add to his impressive trophy haul when he takes on Tala’ea El Gaish on 21 September in the Egyptian Super Cup.