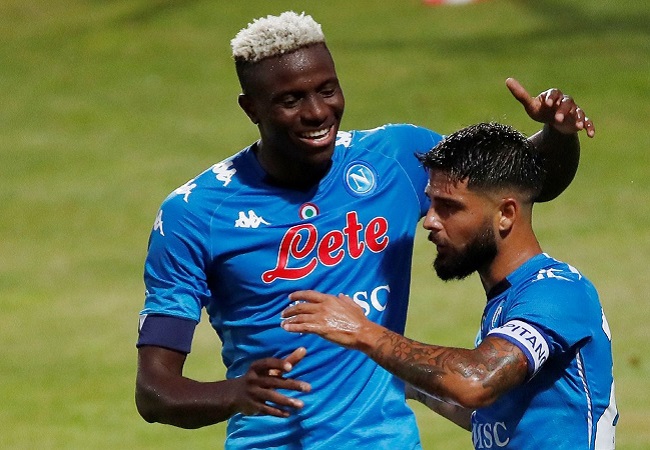 Nigerian striker Victor Osimhen scored his first Serie A goal of the season in Napoli’s 4-0 away win against Udinese on Monday night. Osimhen followed up his brilliant brace against Leicester City in midweek with a simple finish against Udinese. And Napoli captain Lorenzo Insigne has rubbished talks that he is furious with Victor Osimhen for ‘stealing’ in to poke home a goal-bound effort from the Belgian attacker.

Insigne had managed just one strike while Osimhen was without a Serie A goal this term heading into the Monday night clash.

And the Blues’ skipper thought he had claimed his second league goal when he executed a delicious lob over the Udinese goalkeeper in the 23rd minute.

But Osimhen raced to poke the ball in just before it crossed the line to grab his first goal of the season. A goal that Napoli’s first of the meeting.

Three more efforts came from Rrahmani, Koulibaly, and Lozano. They made it to four to power Luciano Spalletti’s men to a commanding victory over Udinese and the top of the Serie A table.

At the end of the match, Insigne was asked if he held any grudge against Osimhen for denying him another appearance on the scorer’s chart.

The captain of Napoli however maintained that he was more pleased to lead his team to another league win.

“It doesn’t matter who scores.” Insigne told DAZN as per Il Napoli Online.

“My goal will come. It’s okay even if the goal is given to Osimhen! It is not easy to come to Udine and score 4 goals. We just have to keep doing what we are doing.”

Osimhen’s latest strike, though, pushed Napoli into the Serie A record books, with the Neapolitans becoming the third team, after Juventus and Milan, in the history of Serie A to score in at least 30 games in a row.

The Blues are favourite to keep up that amazing scoring run when they take the trip to the Stadio Comunale Luigi Ferraris to keep another away date with Sampdoria on Thursday.