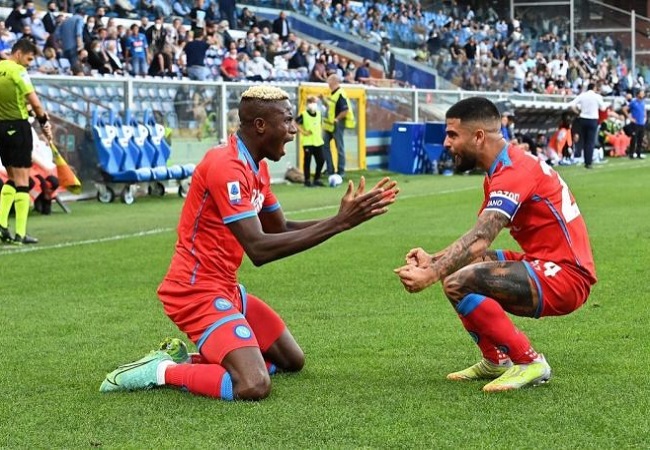 Victor Osimhen is pleased with his excellent performances for Napoli in recent times. The Nigerian international scored for the third game in a row to power Napoli to another commanding away win in the Italian top-flight. But he has also tendered his apology to the club’s supporters for his absence midway through last season.

The Super Eagles striker has put behind a terrible start to the season to score five goals in his last three matches. This performance includes a brace in the 4-0 thrashing of Sampdoria at the Stadio Comunale Luigi Ferraris on Thursday.

The 22-year-old opened his account for the season with a fantastic double at Leicester City last week. He then hit the target against Udinese on Monday – his first Serie A goal of the campaign.

The former Lille man then dropped another man-of-the-match showing as he scored early in each half to help claim a convincing 4-0 victory over Sampdoria on matchday five.

And the Napoli record buy is pleased with his displays for Luciano Spalletti’s men.

“For me, it is important to start well.” Osimhen told DAZN, as per TuttoNapoli, after the match.

“This gives me confidence to score other goals. I’m happy with my performances.” He continued.

The Nigerian international managed ten goals in his debut season for Napoli. And he could have had more if a shoulder injury, which he cupped while on international duty with the Nigerian national team last year, had not halted his momentum.

While many Napoli fans awaited his return at the turn of the year, Osimhen suffered another setback after testing positive for coronavirus. And he had to be sidelined again.

The former Golden Eaglets has finally apologised to the club’s fans while revealing that club boss Spalletti is the reason behind his current good form.

“I’m sorry for what happened last year between Covid-19 and injury.” He added.

“Spalletti also helped me with the trust he gave me. And I hope to repay it. I’m honoured to have a coach like him. He gives me a lot. He stops after training, and together we work hard.”

Also Read : VICTOR OSIMHEN IN SIX NAPOLI PLAYERS IN SERIE A TEAM OF THE WEEK

Osimhen could equal his personal record of netting in four consecutive matches for Napoli if he finds the net this weekend against Cagliari.