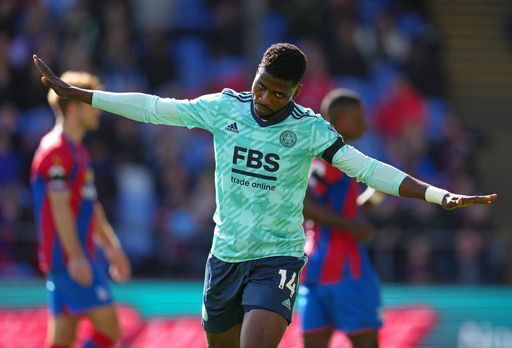 Kelechi Iheanacho was on target as Leicester City threw away a two goals lead to play 2-2 draw against Crystal Palace at the Selhurst Park.

Crystal Palace levelled through Michael Olise and Jeffrey Schlupp in the 61st and 72nd minute respectively.

Reflecting on the game, Leicester City manager Rodgers said they need to fortify the midfield.

He hailed Iheanacho and Vardy for rheir partnership which he noted were threat to the opponent.

“I just felt we needed a little bit of dig in midfield,” he said.

“Too many times over this opening period, we haven’t been close enough to people and, for the hour, I thought he did really well.

“He needs to improve in terms of taking the ball, passing it and keeping it, but overall, I thought his contribution was really good

“We went with two strikers and both those boys are a real threat and then it’s just trying to work from there with the wingers coming on the inside just to pose more of a threat.

“We’re a squad that wants to win games. We lost in the week and we wanted to win today.

” We should have won, but we didn’t, so on our performances and results, there’s no letting off, we’re here to win and that’s what we want to do.”