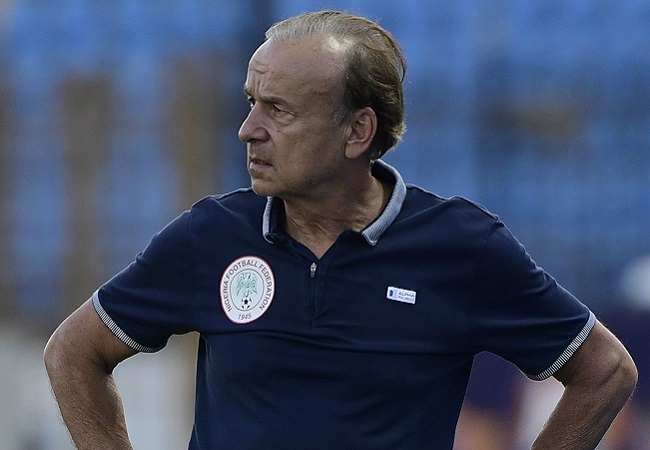 Nigeria’s coach Gernot Rohr is bearing most of the brunt from fans. But the players are also not spared following their disastrous performance in the 2022 World Cup qualifier against the Central African Republic on Thursday.

The Super Eagles were the clear favourites going into the first leg of their doubleheader clash against Les Fauves at the Teslim Balogun Stadium in Lagos.

The odds favoured Nigeria as not only they were 90 places above their rivals in the FIFA rankings, they had also not lost a World Cup qualifier at home in 40 years.

However, the unthinkable happened in Lagos as Karl Namnganda capitalised on a defensive error from Leon Balogun and William Troost-Ekong to score the only goal of the game and claim a famous win for the Wild Beasts.

It was a well-deserved win for CAR. But it was an embarrassing display from the Super Eagles. And fans showed their anger after the game, with Rohr bearing most of the brunt on social media.

Some called for the German tactician’s resignation, while others hit out at the team’s display.

For another, “Gernot Rohr is the worse coach in Nigeria’s footballing history.”

A fan compared the Super Eagles with the current government in the country.

Some directed their angers to the players.“This Nigeria players is the definition of Nigeria problem.”

“What was Leon Balogun trying to do? This isn’t a team. This is a collection of individuals. Tactless, uninspiring, filled with bang on average players.”

Some other went on blaming the coach saying : “Can we start #ROHROUT Now? How on earth will a team like Nigeria be without a single attacking midfielder.”

“Watching Nigerian @NGSuperEagles under #Rohr is a big challenge.”

“Rohr has never impressed me ever since he got this #Supereagles job.”

Another fan urged to “Sack this rubbish coach if that is what it takes to get to the world cup in Qatar.”

Nonetheless, despite the flak Rohr and his boys are getting, they have an immediate chance to redeem themselves when they take on the same team in the second leg in Douala on Sunday.