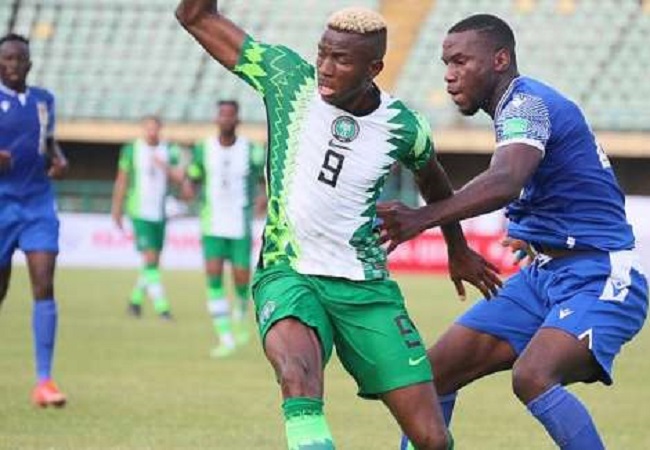 The Super Eagles restored their pride with 2-0 victory over Central African Republic in a 2022 World Cup qualifier in Douala on Sunday afternoon, making up for their mistake in the first leg.

The Central Africans were looking for another shock when they stunned the Super Eagles on their own patch in Lagos. But they were totally outplayed by the three-time African champions.

Leon Balogun made some amends when he pounced on a lofted pass and fired home from close range in the 29th minute.

It was the Glasgow Rangers defender who slipped that allowed Central African Republic to score in the final minute at the Teslim Balogun Stadium. But this time he got on the scoresheet to give Nigeria the lead.

Nigeria had a two-goal cushion with almost the last kick of the first half as Victor Osimhen latched onto a pass from William Troost-Ekong and fired past goalkeeper Prince Samolah.

It was the second away goal netted by the Napoli striker in World Cup qualifying. The Uper Eagles star hit the back of the net in the win against Cape Verde last month.

After the game at Stade Omnisport de Bepanda, Osimhen was delighted with the win. And he took to social media to appreciate his Super Eagles teammates.

“Proud Of This Team @ng_supereagles“. The Super Eagles number 9 posted on Instagram.