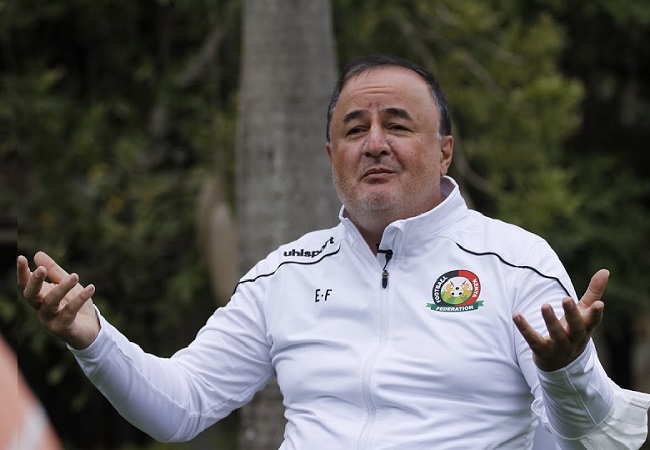 Harambee Stars coach Engin Firat has made it clear that he will only extend his contract if Football Kenya Federation (FKF) present to him an elaborate plan of how they intend to build a formidable team for the future.

The Turkish tactician made the statement on Sunday moments after Mali ended Stars hopes of clinching a ticket to the 2022 World Cup by winning the return leg by a solitary goal at Nyayo National Stadium in Nairobi.

Ibrahima Kone struck the lone goal of the match where Stars wasted several chances. On aggregate, Mali beat Kenya 6-0 to top Group “E” of the qualifiers on 10 points, two above Uganda who beat Rwanda by the same margin at St Mary’s Stadium in Kampala.

Firat, who penned a two-month contract with Stars in September, said he will only agree to a contract extension if FKF convince him that they have plans of building a team for the future.

He said that Mali beat Stars because most of their players play in Europe where there are good facilities and players train regularly.

“I want to talk to the president (Nick Mwendwa). He was hoping that we can do it against Mali. But the reality shows it is impossible.” Said Firat.

“We will give our best against Uganda and Rwanda and show that we are able to change something. But if there is no project, if everything is living daily (short term plan), it does not make sense being here.” Insisted the coach.

Ha rambee Stars did not play any friendly matches that would have given them the opportunity to know the players better before the first leg where they were woeful in all departments.

Bemoaning several open scoring chances in the return leg, Firat said that Kenya has talent, which if nurtured well can see the country excel in international competitions.

“We have got God-given talent here. The problem is polishing it. The first game was a good lesson. Because everything that was wrong I got to know in one match … .Now we put everything together. And they (Mali) only had only one shot. I know where the problem is and what to do for the future.” Explained Firat.

On his part, Mali’s tactician Mohammed Mogassouba said he was impressed with several players in the Kenyan squad.

“It (Harambee Stars) is a good team with individual brilliance. But you see, in football you do not need individual play but collective team work.”