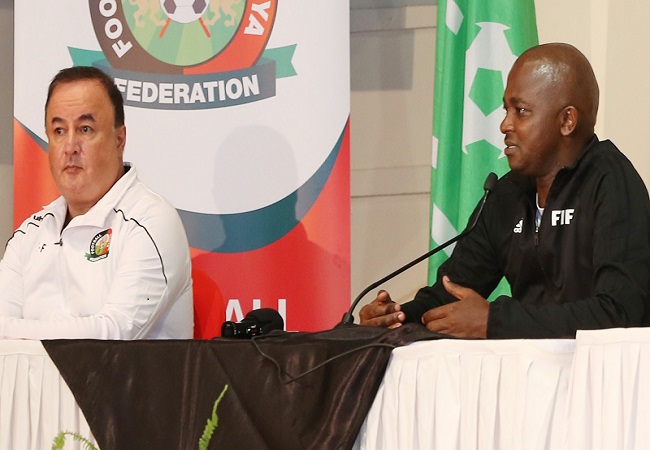 Under-fire Football Kenya Federation (FKF) president Nick Mwendwa has defended the decision to engage Engin Firat as Harambee Stars coach for two months, saying it was for the good of the country.

Mwendwa and Firat who is a Turkish national have been criticized by Kenyans following Harambee Stars failed 2022 World Cup qualifying campaign.

Mali thumped Stars 6-0 on aggregate in back-to-back Group “E” qualifiers to effectively end Kenya’s dream of playing at the World Cup set for Qatar next year.

Mwendwa argued that even if the federation brings in the best coaches in the world, Kenya’s football cannot grow if the talent is not nurtured.

“Even if you bring Jose Mournho, even if you bring Mikel Arteta… .the work that needs to be done is that we need to bring talents to the table. For you to win, you need quality players.” Explained the football boss.

“Let us look at Mali for example. Are we better than them? The answer is that we are not. Because we never brought our players to that level.”

Speaking on Monday night at NTV’s The Game Plan show, Mwendwa said that they opted to engage Firat on a short-term basi. Because they feared plunging the country in another compensation plan for a sacked coach, like it has happened before.

“We have been plagued with tramples around coaches way before I got here (into office). We have paid one coach (Adel Amorouche) around Sh110 million because of just decisions that were not made properly before.” Said Mwendwa via a video link.

“… We learned from that decision and said never again are we going to have the bad decision that caused us to do that. We had another coach (Bobby Williamson) in transition that also cost us about Sh55 millio. And therefore when we were hiring a coach, we were very careful never to plunge Kenya again in this kind of situation.”

In order to avoid Fifa ban that would have seen Stars not take part in the ongoing 2022 World Cup qualifiers, FKF have been forced to use Fifa grants meant for grassroots football development in the country to settle Amrouche’s dues.

Mwendwa stated that they did not go for a permanent coach. Because in case the federation needed to make a change, it would have cost them around Sh1 million dollars in compensation.

Despite Firat’s track record being put to question by Kenyans after he failed to register a single victory with Moldova national team in 11 matches, Mwendwa again heaped praise on him as a “top, top, top coach” during the show.