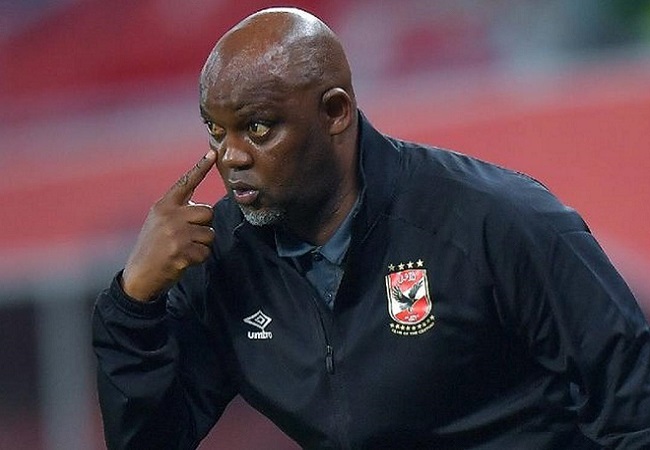 Coach Pitso Mosimane has said he is not happy that Al Ahly started their CAF Champions League title defence with an away 1-1 draw against USGN in Niger on Saturday evening.

He said this after the round-of-32 first-leg match played at Stade Général Seyni Kountché where Ali Maaloul scored in the 19th minute from the spot, but USGN’s Moumouni Diori leveled matters in the 76th minute.

In a post-match interview, the former Mamelodi Sundowns coach said his Egyptian side played under difficult conditions.
“I am not happy with the result. We came here to win but we did not get the result we wanted but it is not easy to play here under these conditions.”

“We like to focus on the positive side. We scored a goal but unfortunately, in the end, we conceded a goal. We defended very well until the goal we conceded,” the South African told Al Ahly website.

The former Mamelodi Sundowns mentor questioned the level of officiation, calling for the introduction of VAR in the continental competition.
“I do not want to comment on the referee’s decision in Akram’s penalty. It is very difficult for a referee to give two penalties in one game in African competitions. It is my 9th year in the CAF Champions League and I know it is difficult to whistle two penalties for an away team,” he said.

“There is only one thing I will say to my beloved continent, when are they going to put VAR in all games? VAR will support everyone because sometimes it is not easy for the referee to see.”

Mosimane has of late struggled with Al Ahly having won the CAF Champions League but then failed to defend the domestic league and cup.