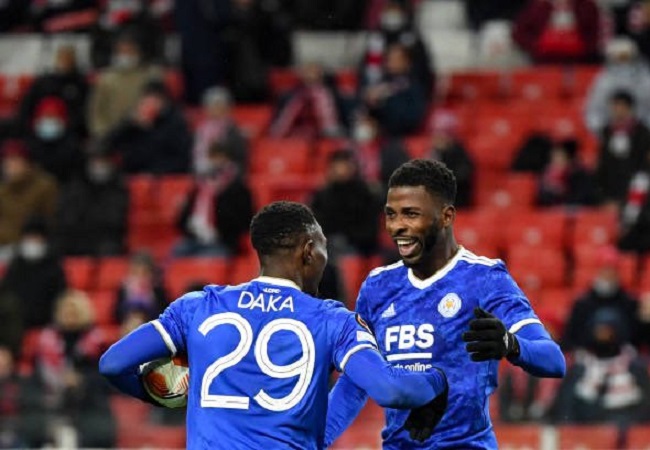 Patson Daka has not been so popular untill the Zambia international scored four times to help Leicester City overcome Spartak Moscow on matchday 3 of the UEFA Europa League. Daka is now in the limelight after his goalscoring heroics in the Foxes’ last two games.

The Zambian striker opened his account in the Premier League against Manchester United before he followed that up with a double brace in a seven-goal thriller against Spartak Moscow.

Surprisingly, there is seemingly no competition between Iheanacho and Daka, with the Nigerian always eager to make a key pass to the Zambian, who profited from two of his assists in the come-from-behind win versus Spartak Moscow.

“Of course, we’ve got to talk about him! He was magnificent. It was a tough one first half. But we got a goal from Patson before the break. And that gave us momentum to go in the second half.” Iheanacho said to Leicester City’s official webpage.

“We came out in the second 45 and said we’d give them a fight. We got the goals and congratulations to Patson, scoring four in a European competition is outstanding. So I’m happy for him.

“Hopefully he will score more. And we will achieve a lot this season.” He added.

Iheanacho too will be hoping to continue his excellent form for Leicester City when they take on Brentford in the Premier League on Sunday, October 24.

The Super Eagles striker has either scored or assisted in each of his last five matches in all competitions.