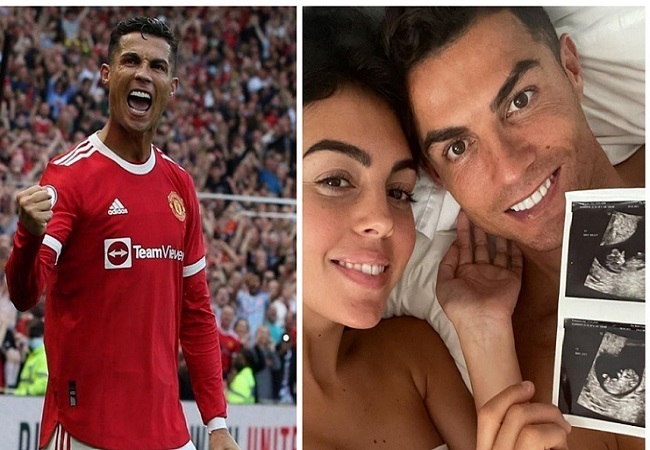 Manchester United and Portugal talisman Cristiano Ronaldo announced on Thursday that he and his partner Georgina Rodriguez are expecting twins. The 36-year-old took to Instagram to make the announcement.

“Delighted to announce we are expecting twins. Our hearts are full of love. We can’t wait to meet you.” Ronaldo captioned the post, which also had a photo of him and Georgina showing the ultrasound images of their twins.

Also Read : CRISTIANO RONALDO NAMES WHO IS “TO BLAME” AFTER MAN UNITED’S HEAVY LOSS TO LIVERPOOL

There was a second picture in the post where Ronaldo can be seen in a swimming pool with his four children.

Ronaldo will welcome his second and third child with Georgina, 27, the Argentina-born Spanish model. The Spanish beauty also shared the same images and caption from her own account.

The couple together have a daughter, Alana, who is three years old. Ronaldo has an 11-year-old son named  Cristiano Junior and four-year-old twins Eva and Mateo. Cristiano Junior’s mother’s identity is unknown. A surrogate mother then gave birth to a pair of Ronaldo’s twins, daughter Eva and son Mateo, in 2017.

Ronaldo had admitted in 2017 that he wanted seven children while Rodriguez last year said: “My desire for motherhood is stronger than anything. I hope to have more children.”

Ronaldo and Rodriguez have been dating since 2016 after meeting at a Gucci store in Madrid where she used to work as a shop assistant for £10 an hour.

Minutes after the Man United striker shared the news, his mother Dolores Aveiro wrote: ‘Let my grandchildren be born healthy. That’s what matters the most.’

The 66-year-old, who suffered a life-threatening stroke last year, posted the twins’ ultrasounds on her Instagram Story around the same time along with an applause emoji.