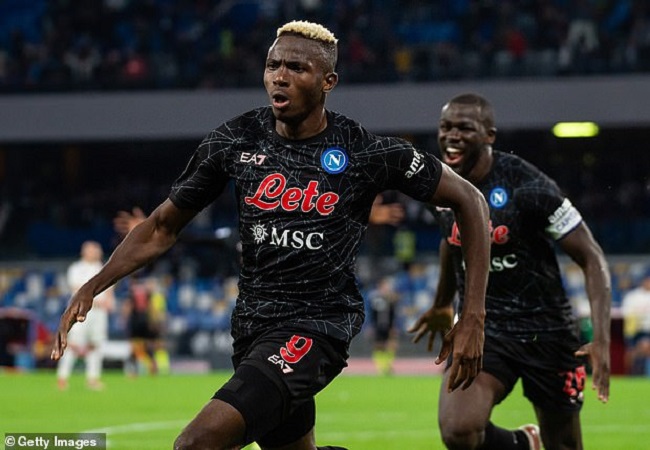 Victor Osimhen was again unplayable on Thursday night as Napoli beat Bologna 3-0 to move joint top with AC Milan in the Italian Serie A this season.

The Super Eagles star did not score. But he had a hand in two of the three goals Luciano Spalletti’s men scored on Thursday night at the Diego Armando Maradona Stadium.

Fabian Ruiz put Napoli ahead in the 18th minute with a stunning left-footed curler from outside the box. Insigne made it two from the penalty spot in the 39th minute after Gary Medel handled in the box while contesting for a cross with Osimhen.

The Nigerian was a handful for defenders throughout the game and could’ve had a goal to himself. But he fired four shots off target while he was denied by the keeper on one occasion.

But despite his failure to score, Osimhen still had an impact on the game, winning the penalty for Napoli’s third, which Insigne once again converted.

The win sends Spalletti’s men back to the top, albeit with AC Milan. Both teams are the only unbeaten teams in Serie A this season, with nine wins and a draw.