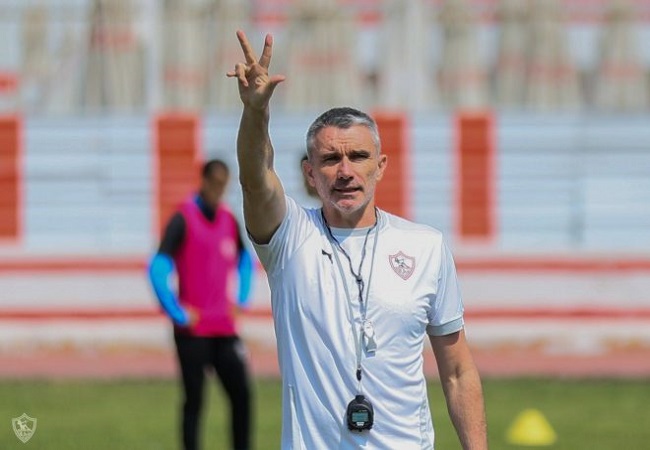 The defending champions Zamalek had a good start to the 2021-2022 season with a 2-0 win over ENPPI in their opening game.

The next obstacle for the White Knights will be Egypt Super Cup winners Tala’a El-Gaish as the two teams will come face to face on Sunday the 31st of October at 15:30GMT.

After that, the Whites will host bitter rivals Al Ahly in the Cairo Derby next Friday, 5 November. The Red Devils also had a perfect start to the campaign by beating Ismaily 4-0.

Despite their similar start, Carteron believes Al Ahly will have an edge in their encounter and for the entirety of the season, especially after Zamalek were handed a two-transfer window ban.

“I’m happy to have had a strong season. And the current season will be very difficult after many clubs have spent large amounts of money. But we will try to make their task difficult. Because they will have very high ambitions.” Carteron told ONTime Sport TV.

“We are dealing with the current situation (the transfer ban). We have players who came back from loan that are in great form. We were the champions last season. And we strive to defend the title.

“Financial stability is very important for any team. It’s not easy to convince a player to do more if he didn’t get his dues. So such matters must be resolved.

“Al Ahly are favorites to win the derby because of the amount of money they spent in the transfer window. Al Ahly will be under great pressure because of the transfers they made. But we did not spend anything. We will also fight them for the league title.

“We are doing everything we can to renew for Achraf Bencharki. Because he is a great player and the fans love him. I don’t have an explicit answer. But I want to keep him as long as I’m at the club.

“I hope we face Al Ahly again in the Champions League final. We aren’t favorites to win the league title. Because we haven’t signed any players, but I love such challenges.

“I hope that there will be equal opportunities in the Egyptian Premier League. For instance, I don’t understand at the moment why Al Ahly didn’t face Ismaily in Ismailia. If you play all your matches in the best conditions, then this is not a league but rather a one-team championship. Why will Zamalek go to Ismailia and Al Ahly didn’t?

“We can’t do anything about the Shikabala crisis. He is suspended and we have to focus on the rest of the players. We were definitely saddened by his absence. And I don’t know why Zamalek players are always suspended every time we win a trophy. This happened in the league, before that in the Egyptian Super Cup, and even in the youth league.” He concluded.