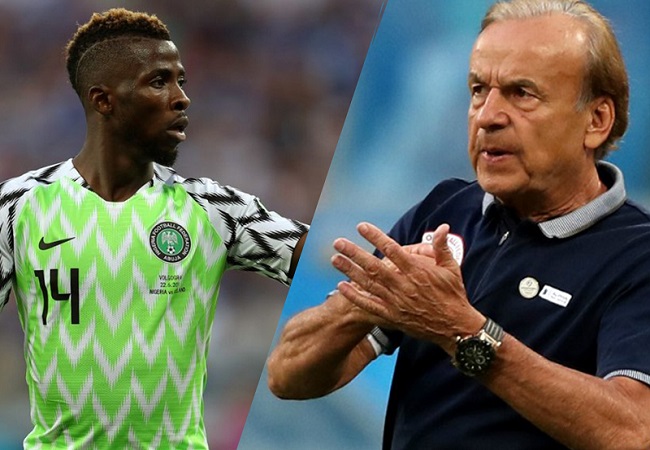 Super Eagles head coach, Gernot Rohr, has blamed Kelechi Iheancho’s inability to maintain his goal scoring form in the team as a result of the poor state of pitches in the country.

Aside from his double against Liberia in September, Iheanacho has struggled in his matches for the Super Eagles, most recently the doubleheaders against The Central African Republic in a 2022 World Cup Qualifiers last month.

However, in an interview with Elegbete TV, the German tactician stated that the Nigerian international gives more decisive passes than scoring goals.

“We use Kelechi like he is used in Leicester, like a second striker. He is playing with Jamie Vardy. But he is not starting so much, actually, yeah.” Said the coach.

“He is coming in but not playing all the time. But we try to give him the same opportunity like what he is used to with his club. That’s what we try all the time with the players.

“We had Osimhen, not Vardy, and Kelechi was the second striker, coming sometimes from behind, taking the ball, giving decisive passes like he is doing in his club more and more. He even gives more decisive passes than he scores goals, actually.”

“So the real problem is, I think he doesn’t have the same conditions of the pitches and everything in Nigeria like he has in England. It’s a different football.” Rohr added.