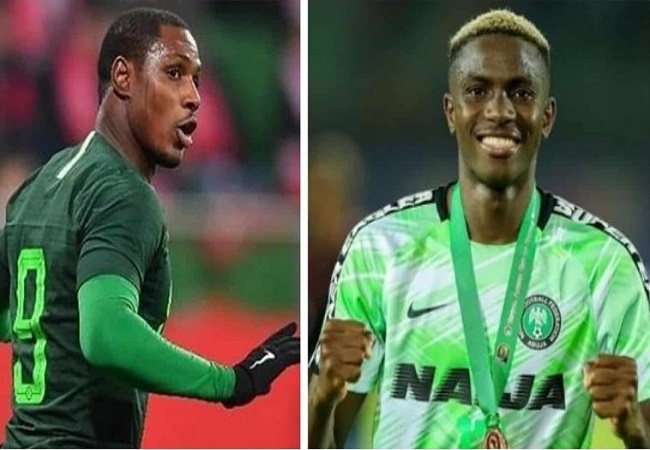 Super Eagles star, Victor Osimhen, has dismissed fears in football circles in the country that the return of AFCON 2019 top scorer, Odion Ighalo, to the senior national team was going to create rancour.

Rather, the Napoli of Italy talisman, described Ighalo’s ‘second missionary journey’ to Eagles as going to pay off well for Nigeria.

“It’s good for the team. The coach and the federation know what is the best for the team. We welcome him (Ighalo) with open arms. And we look forward to receiving him in camp.” Osimhen said speaking in Tangier, Morocco after Wednesday’s training ahead of Nigeria’s clash with Liberia on Saturday.

Osimhen, 22, restated his deep respect and admiration for the former Manchester United’s star.

“Like I said before , he (Ighalo) is like a big brother to me and I like him so much. I learn a lot of things from him. And it is important to have him in the team.

“We all have a common goal to qualify for the World Cup and do well at the AFCON. Whatever is good for the team, I think the coach and the federation will bring it into play.” Stressed Osimhen in the interview with NFF TVin Morocco.

He was earlier scheduled to hit camp yesterday. But when he didn’t show up, the social media was abuzz with speculations that Ighalo may have changed his mind about returning to the squad he voluntarily quit two years ago after helping Nigeria to win the bronze of AFCON 2019 as top scorer.

Spokesman of the team, Babafemi Raji however confirmed last night that Ighalo and Enyimba’s goalkeeper, John Noble were expected to arrive Morocco before noon.

Super Eagles on nine points will consolidate with victory over Lone Star of Liberia on Saturday. Should Cape Verde drop point against the Blue Sharks of Central African Republic in the group’s other game, Nigeria would have qualified for the final playoff with a game to spare just like in the last edition.