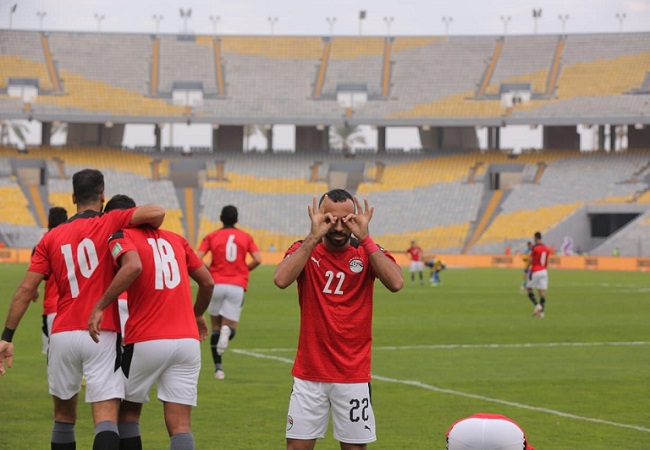 Egypt crowned their qualification to the play-off round of the Qatar 2022 FIFA World Cup with a well worked 2-1 win over Gabon in Alexandria on Tuesday evening as they finished their group phase unbeaten.

The victory took The Pharaohs to 14 points off four victories and two draws.

Meanwhile, Gabon finished second despite the draw, edging out Libya who conceded late on to draw 1-1 with Angola at home.

Already having sealed a ticket before the final match, Egypt were under no pressure with coach Carlos Queiroz rotating his squad.

They got into the lead after four minutes when Mohamed Magdy Afsha converted from the penalty spot after Ahmed Yasser Rayyan was brought down inside the box.

Denis Bouanga almost restored parity for the Gabonese in the 14th minute. But keeper Mohamed Elshenawy made a good save from a tight angle.

The visitors finally drew level nine minutes into the second half when Jim Allevinah pushed the ball into the net with the back of his heel on the ground after his initial attempt to connect to a Bouanga cross saw him go to the ground.

After conceding Egypt made changes, bringing in Mo Salah and Mostafa Fathi. They got their winner in the 74th minute when Johann Obiang scored into his own net as he tried to cut out an Afsha pass intended for Salah inside the box.

Gabon had to finish the match with 10 men when Bouanga was sent off for a second yellow card with three minutes left.

In the other Group F game, Libya had a good chance of pipping Gabon to second place in the group with a win. But they conceded a late equalizer to draw 1-1 and move to seven points, same as Gabon but with an inferior goal difference.

Sand Msoud gave Libya the lead four minutes after the break when he converted from the penalty spot. But, Angola were never letting it go easy.

They finally got the equalizer in the 80th minute when Zini guided the ball home with a simple side footed finish inside the box.