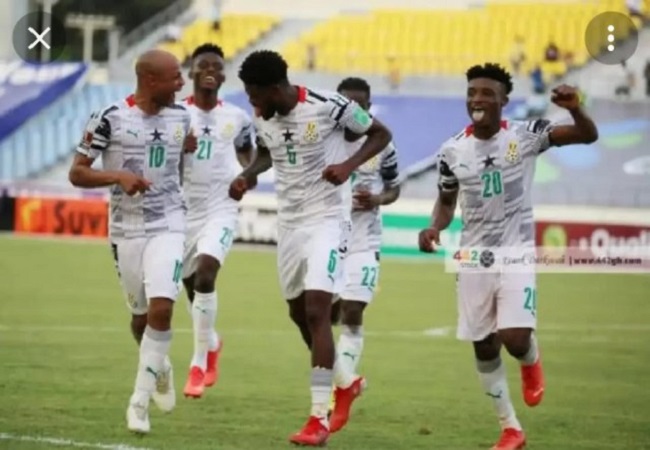 Ghana won over South Africa thanks to a penalty goal judged controversial to advance to playoff round. However, the General Secretary of the Ghana Football Association (GFA), Mr. Prosper Harrison Addo has allayed fears of Ghanaians over the South Africa Football Association (SAFA) decision to write to FIFA and the Confederation of Africa Football (CAF) for a replay of Sunday’s Qatar 2022 FIFA World Cup qualifier at the Cape Coast Stadium.

Ghana claimed victory after Andre Ayew converted a 33rd-minute penalty to ensure his side finished as winners of Group G to earn a playoff spot.

Soon after the game, the SAFA stated it will launch an official complaint to football governing body FIFA and CAF over the conduct of Senegalese referee Maguette Ndiaye, who officiated Sunday’s game.

According to reports monitored on South African news website news24.com, the SAFA boss Tebogo Motlanthe told a two-man South African media at the team’s base in Cape Coast on Sunday that “they were robbed. The penalty incident was not in isolation. We will be writing an official letter to FIFA and CAF on Monday.”

Motlanthe decision was premised on an incident in 2017 where FIFA ordered a World Cup qualifier between South Africa and Senegal to be replayed after the Senegalese Football Federation lodged a protest over referee Joseph Lamptey’s conduct, which included an incorrect awarding of a penalty award to Bafana. Bafana Bafana won the game in Polokwane 2-1.

Lamptey, from Ghana, was subsequently handed a life ban for match manipulation.

“We will use the Senegal game where FIFA requested us to replay because of the referee’s action, and not ours. The Ghana game is of similar nature. We believe in many ways that it was fixed. We are collecting information that will be used to support our case.”

“Already before we could play, it was well known everywhere – on the media platforms and team Ghana itself. They already knew they were going to get a penalty. And it was just a question of when. When it happened, it confirmed all these things that were shared.”

Reacting to these allegations, Mr. Harrison Addo in a chat with the Times Sports said: “Nothing would come out of this complaint.”

“Ghanaians should continue to enjoy the victory. Nothing would come out of this so-called appeal. I would be surprised if there is something like that from SAFA.”

According to him, defender Rushine De Reuck who was behind Daniel Amartey in the box tugged him and not the player beside him.

“Those who are believing it is not a foul should get footage of other angles and watch for themselves.”

Mr. Harrison Addo continued that “those citing the referee J.O. Lamptey incident from the 2017 World Cup qualifier between South Africa and Senegal should be reminded that it was a handball that never was. And again investigations discovered that there were betting to the effect that there would be a penalty, and they would win 2-1.”

Also Read : 2022 WORLD CUP QUALIFIERS : CHECK OUT ALL 10 AFRICAN NATIONS QUALIFIED FOR THE PLAY-OFFS ROUND

Ghana is among the 10 countries that would enter the play-offs draw in March next year for one of the five slots available to Africa for the 2022 Qatar Mundial.