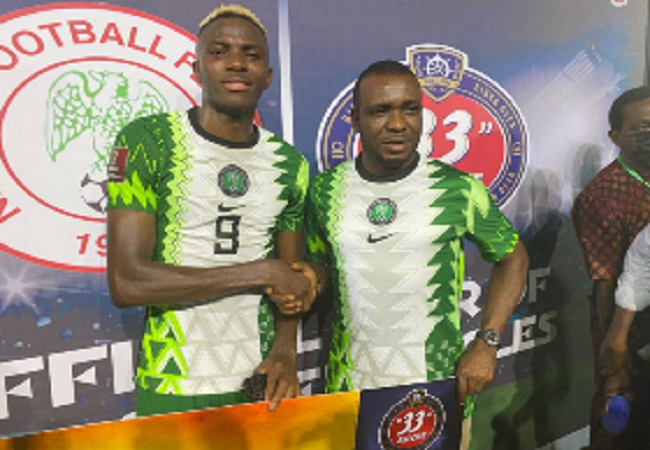 Cape Verde held Nigeria with 1-1 draw in a 2022 World Cup qualifier staged at the Teslim Balogun Stadium on Tuesday evening. And Victor Osimhen has been recognized for his outstanding performance during this game helping the Super Eagles reach the playoff round.

Also Read : WCQ: SUPER EAGLES THROUGH TO PLAYOFF ROUND AS LIBERIA SIGN OF WITH WIN

Immediately after the game, the 22-year-old was handed a dummy cheque of one million naira as Man-Of-The-Match, courtesy NFF partners 33 Export. And he was presented with the cheque by Uaboi Agbebaku, Legal Director/Company Secretary of Nigeria Breweries PLC.

Osimhen also won the Most Valuable Player award, worth one million naira also, sponsored by GAC Motors – another NFF partner.

The Napoli striker gave the the three-time African champions a dream start when he netted from close range in the first minute after a defensive error by Roberto Lopes.

And in doing so the number nine took his goal involvement to fifteen (10 goals, 5 assists) from nineteen appearances for the Super Eagles.

Three minutes into the second half, Osimhen was prevented from netting his second of the game when Stopira cleared the danger after a gorgeous cross to the back post by Jamilu Collins.

Also Read : 2022 WORLD CUP QUALIFIERS : CHECK OUT ALL 10 AFRICAN NATIONS QUALIFIED FOR THE PLAY-OFFS ROUND

Of the nine goals scored by the Super Eagles in 2022 World Cup qualifying, the 2015 U17 World Cup Golden Boot winner accounted for four.