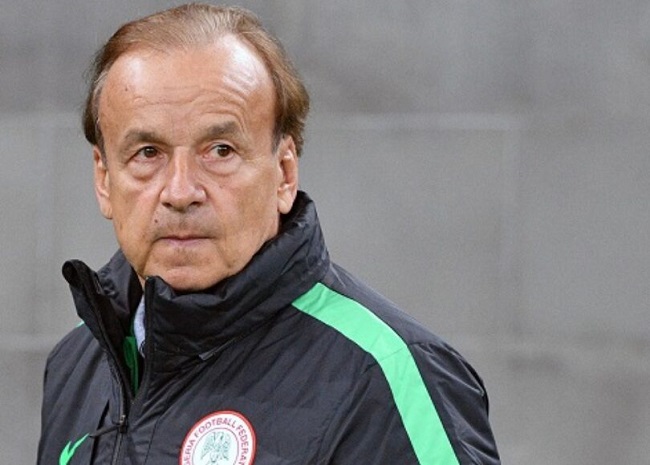 Nigeria has qualified for the 2021 AFCON to take place in Cameroon early Junaury. But the Super Eagles barely made it through to the 2022 World Cup qualifying play-offs after a disappointing 1-1 draw with Cape Verde earlier this week in Lagos. And this has raised critics urging Nigeria Football Federation (NFF) to sack gernot Rohr.

Chief Whip of the Senate, Orji Kalu, has slammed Super Eagles manager, Gernot Rohr, insisting that the German tactician is not a coach.

The outcome of the match ensured that the Super Eagles qualified for the 2022 World Cup play-off after finishing top of the group with 13 points.

“Gernot Rohr is not a motivator to the players. Because he has nothing to offer. I can even motivate the players more than him. Because I am a super motivator of my players.” Kalu told NAN.

“He is not a coach. I don’t see anything good in him. He has no stamina, no strategy. He doesn’t play any system. And his team doesn’t excite me.

“Where the coach comes from doesn’t matter. We have a lot of Nigerian coaches who, if you pay them what is due to them, will do the job well.

“We have a lot of coaches both locally and internationally. And I am sure NFF President Amaju Pinnick knows these people.

“If he is in doubt, he should consult me. And I will tell him some names of coaches he can approach, whether local or international.

“If you ask me, I would prefer a Nigerian to coach the Super Eagles. But he should be paid well and given a schedule of international standard to operate.” He insisted.

Kalu had reportedly on Thursday, through his social media handle, called on the Nigeria Football Federation (NFF) to find a replacement for Rohr, as he had failed to live up to the expectation of sports-loving Nigerians.