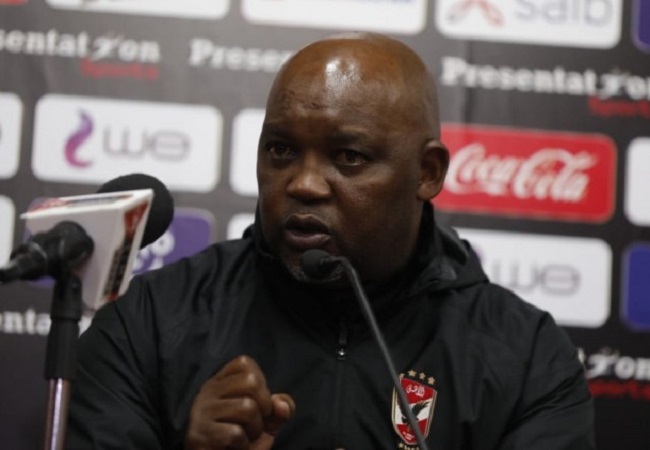 Despite Al Ahly taking a 2-0 lead thanks to goals by Magdi Afsha and Percy Tau. Two second half goals by the hosts meant Pitso Mosimane’s side had to scramble for a stoppage time winner.

Just after the game, Jingles’ was involved in a heated argument with a journalist following the dramatic win. The journalist who questioned Pitso Mosimane’s decision to bring on Luis Miquisson was firmly dealt with by the three-time CAF Champions League winning coach.

“Do you mean that Ammar should participate and Miquissone or Abdelkader not? Who won the free kick from which we scored the winning goal? The freekick? Who is the player whose winning goal came from his side?” – Pitso Mosimane questioned the reporter.

“Miquissone is a player at Al Ahly and has the same chances as Ahmed Abdelkader and El-Shahat to participate. And I will replace any player. I replaced Afsha. Tau scored, I Replaced Percy Tau. Mohamed Sherif also.”

“We don’t have a star here. We have all equal good players.”

Mosimane continued defending his position as the coach beleives it isn’t an easy stadium to come to.

“Their stadium is very difficult. And the grass is not in the best condition. But we do not complain about that. Because they also play in the same stadium.” Pitso Mosimane added.

“It is not easy for any team to come to Mahalla and play. And we managed to win and scored three goals.”