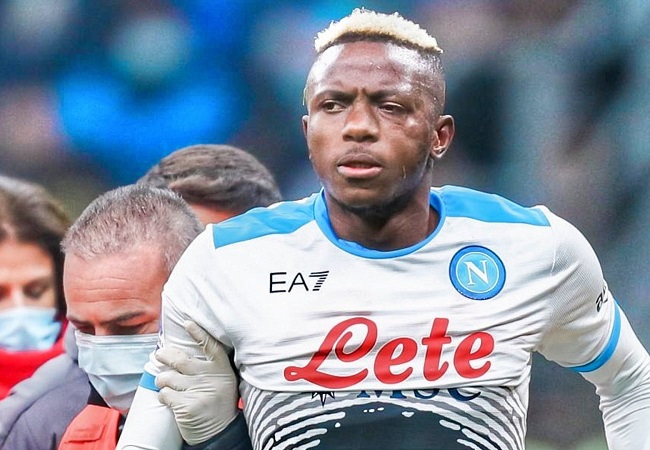 Napoli lost 3-2 loss to Inter Milan on Sunday in Serie A game. And Victor Osimhen unfortunately picked up two injuries in the clash against Simeone Inzaghi’s men at the San Siro stadium.

The Super Eagles striker has returned to Naples on Monday evening. And he will undergo surgery on Tuesday following his injury.

Napoli provided a fresh update on Osimhen’s current status on their social media pages. However, the Neapolitans did not put a time on his return.

“Victor Osimhen is returning to Naples this evening where he will remain under observation. He will be operated on tomorrow by Gianpaolo Tartaro, who will be assisted by Dr Raffaele Canonico, the head of the club’s medical department.” Napoli’s statement read.

Osimhen walked off in the 55th minute of the encounter between Luciano Spalletti’s men and the Nerazzurri following a clash of heads with Milan Skriniar.

Both players needed treatment. But it was Osimhen that came off worse. The 22-year-old Nigerian striker walked off with a swollen eye and cheek.

After undergoing a test, it was revealed that he suffered an orbital fracture and broke his left cheekbone.