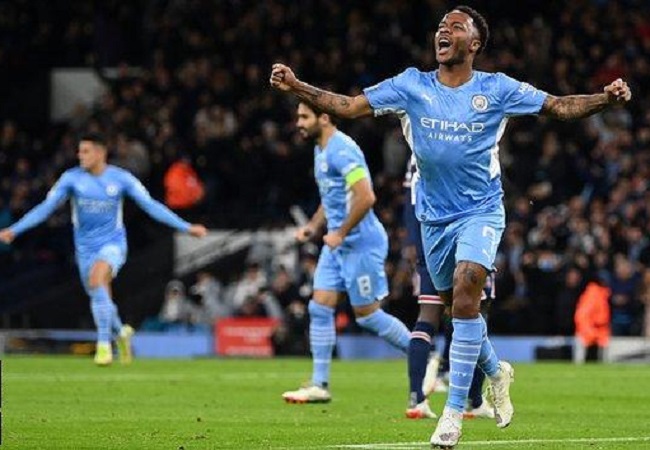 Manchester City rally from a goal down to beat PSG 2-1. Kylian Mbappe gave visitors lead early in second half. But goals from Raheem Sterling and Gabriel Jesus secure victory for hosts. City win Group A with game to spare. PSG also through after RB Leipzig’s win at Club Brugge.

Manchester City sealed their passage into the Champions League last 16 as group winners after coming from a goal down to beat Paris Saint-Germain 2-1 at the Etihad Stadium.

City dominated the opening 45 minutes. But they could not find a breakthrough as Mauricio Pochettino, who was heavily linked with the vacant Manchester United job in the build-up to the game, saw his PSG side hold firm under a barrage of pressure from the hosts.

Pep Guardiola’s side were made to pay for their wastefulness early in the second half as Kylian Mbappe put the Ligue 1 leaders ahead against the run of play.

However, City stormed back, with goals from Raheem Sterling and substitute Gabriel Jesus completing the turnaround, to secure a place in the knockout phase with a game to spare.

The victory sees Guardiola’s men, who are aiming to win their first Champions League title, also top Group A with one game left to play, while PSG are also through despite the loss in Manchester because of Club Brugge’s 5-0 defeat at the hands of RB Leipzig.

RB Leipzig scored four goals in a rampant first-half performance. And they added one more after the break for a comprehensive 5-0 victory away at Club Brugge. This win lifted them off the foot of Champions League Group A.

Emil Forsberg scored twice, including one from the penalty spot, with Christopher Nkunku and Andre Silva adding the other two for Leipzig in the opening 45 minutes.

Nkunku then got the fifth in stoppage time at the end of the second half.

It was Leipzig’s first win of the group phase despite having to do without coach Jesse Marsch and captain and first choice goalkeeper Peter Gulacsi, who tested positive for COVID-19 on the eve of the game.

Man City resume their Premier League campaign at home to West Ham on Sunday. Guardiola’s side are away to RB Leipzig in their final Champions League group game on Tuesday December 7.