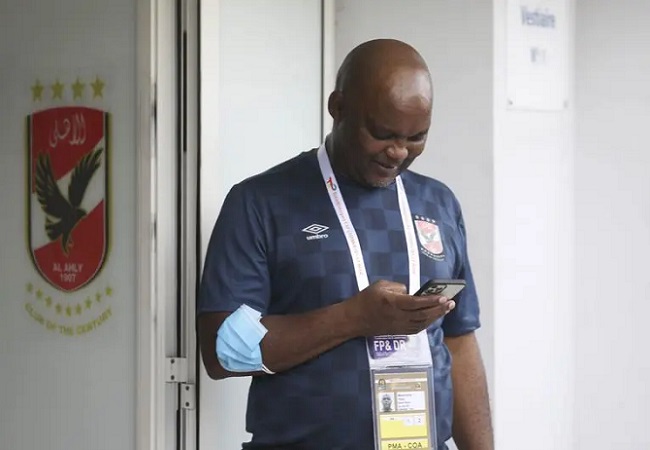 In October 2020, just days before that season’s CAF Champions League semi-finals, Weiler left Al Ahly after opting against extending his contract due to personal reasons. And he decided to return home to his native Switzerland.

Weiler’s successor at Al Ahly was none other than former Bafana Bafana and Mamelodi Sundowns coach Pitso Mosimane who successfully led the Egyptian giants to two CAF Champions League titles in the space of eight months.

Also Read : “ALL CRITICISM AGAINST MOSIMANE IS EXAGGERATED AND ILLOGICAL” – AL AHLY PRESIDENT

Mosimane’s success with Al Ahly was also seen in the FIFA Club World Cup when he helped the team claim their second ever bronze medal in 2021, repeating what only Manuel Jose could previously do.

In his interview on ONTime Sports TV channel, El-Khatib explained the thinking behind Mosimane’s selection.

“Weiler was a good coach. But he left for family reasons, his family wanted him to stay with them. So he had to make that choice.” El-Khatib said.

“Before Weiler’s last trip to visit his family, I told him we had to renew his contract before a certain date or we will have to part ways. I was worried because we were at a difficult stage in the CAF Champions League.

“Rodolfo Arruabarrena [Pyramids ex-head coach] was the major candidate before Mosimane. But we wanted to look for someone who knows more about African football, someone who already has experience in the CAF Champions League.

“Mosimane’s name was suggested by Mohsen Saleh and Zakaria Nasef. And when we saw his CV and his achievements, the committee agreed on choosing him.

“When we were on the plane before Sundowns’ away game in 2020, I spoke to Pitso on the plane. And I felt that he loved Al Ahly, even before joining the team.”