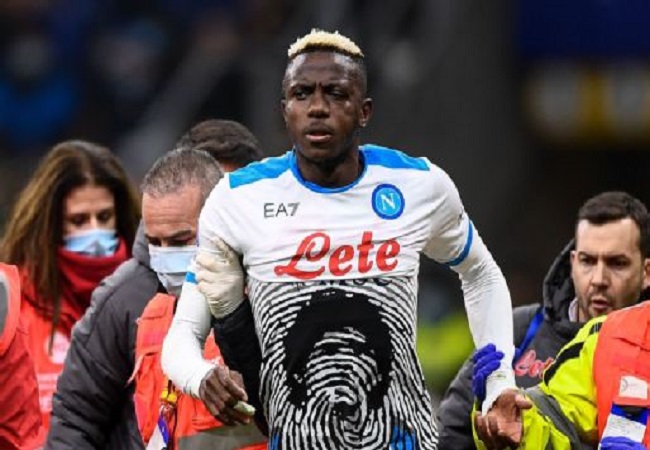 Napoli forward Victor Osimhen has been discharged from the Ruesch Clinic. And the club confirmed the Nigerian striker will be ‘re-evaluated in 10 to 15 days’.

Osimhen suffered facial fractures after the accidental clash of heads with Inter Milan defender Skriniar. But the centre-forward’s face was severely damaged in the incident.

It became immediately clear that he had fractured his cheekbone. But the surgeon who operated on Osimhen’s facial fractures revealed the Nigeria international required ‘six plaques and 18 screws’ to repair the ‘devastating’ damage.

Osimhen has been ruled out for 90 days, thus ruling him out of the Africa Cup of Nations. But Napoli confirmed he has ‘returned home’ today.

He will spent some time to rest at home before being re-evaluated after two weeks, as the initial recovery time of 90 days can’t be 100 per cent certain after the ‘complex’ operation.

“Victor Osimhen was discharged from the Ruesch Clinic this morning and returned home.” The club confirmed in a statement.