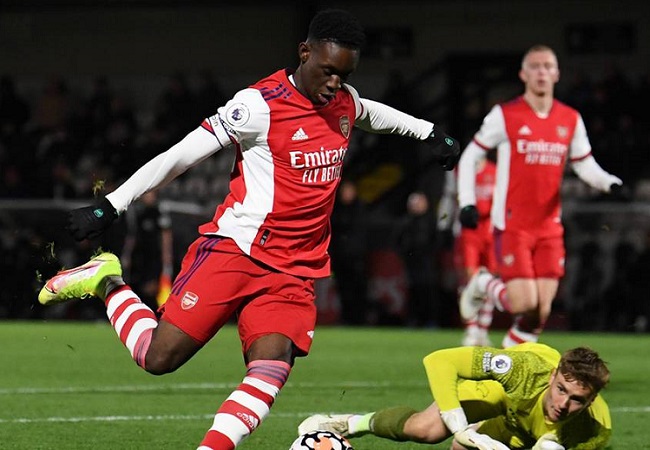 Folarin Balogun went home with match ball as Arsenal were beaten 5-3 by Derby County in a Premier League 2 clash at Meadow Park in Hertfordshire on Friday night.

Sibley scored in the third minute to give the Rams a dream start. But Arsenal were in front midway through the first half courtesy of a pair of goals from Balogun, before an Alebiosu own goal handed the visitors an equaliser at the break.

Arsenal had real reason to worry as Derby County had a three-goal lead before the hour mark thanks to Plange, Dixon and Sibley.

Balogun scored arguably the pick of the goals in the 72nd minute when he curled the ball into the far corner to bring the Gunners back in it. But Derby County were able to see out the win.

The Hale End Academy graduate has mustered fourteen goals in all competitions for Arsenal’s development squad in 2021-2022 and is the leading scorer in the Premier League 2.

Despite the loss vs Derby, Arsenal are still very much in the mix in terms of the table with only two points separating them from table toppers West Ham United.