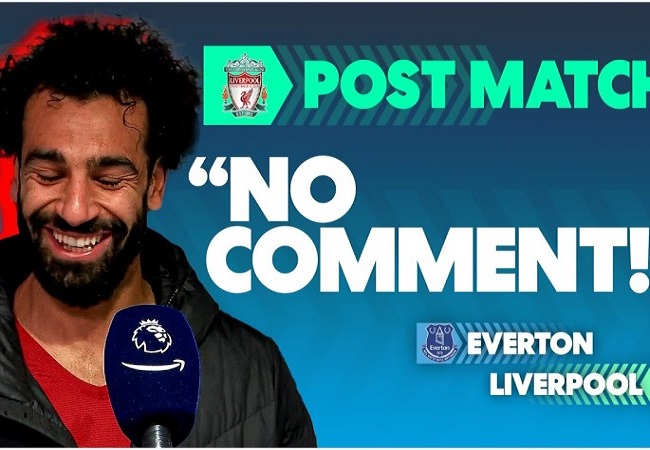 Mohamed Salah scored a brace during Wednesday’s 4-1 derby trouncing at Everton only served as a reminder of his special talents.

The Egyptian international has enjoyed an incredible year for the Reds, his standards never dropping. With his 32 club goals in 2021, Salah is proving time and again why he’s one of the world’s elite stars right now.

However, that wasn’t enough to earn him recognition on the biggest stage of all. Instead, it was Lionel Messi who took home his seventh Ballon d’Or. The PSG forward pipped Robert Lewandowski to the award, with Chelsea’s Jorginho finishing third.

Salah’s tally was the same as Messi going into the ceremony on Monday night. But his double against Everton now sees the Egyptian surpassing him on 34 goals for 2021.

His snub certainly infuriated Jurgen Klopp. Now the player himself has offered an amusing reaction to only finishing seventh.

“I have no comment.” He replied after bursting out laughing.

“Hopefully, you never know!” responded Salah when then asked if he could finish higher in 2022.

Although Mohamed Salah is happy to laugh off the snub, Messi knows he will face strong competition from Salah and others next year.

“Salah will have opportunities in the years to come.” He said after winning the award. “Both players [Salah and Lewandowski] are at their best at the moment and will have more chances to win it.”

As is typical of the man, he is only thinking about success for Liverpool ahead of personal accolades.

“Hopefully for many more.” He said.

“My first target is to win something with the club – Champions League, Premier League, hopefully both. – And that will be good for everyone.” Added the Egyptian king.

Of course, with Salah’s deal expiring in summer 2023, his latest double will only strengthen his claims to a huge payrise at Anfield.