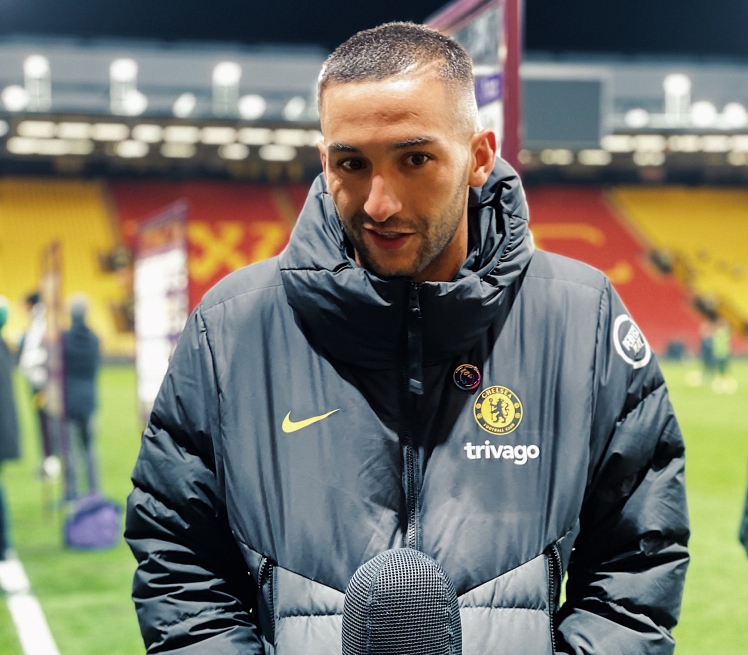 Chelsea winger Hakim Ziyech said he was delighted to score his first league goal of the season and helped his club to a vital 2-1 win against Watford on Wednesday.

Ziyech came off the bench and scored the decisive goal for the Blues after he was set up by Mason Mount in the second half.

The Blues bounced back to winning ways following their 1-1 draw against Manchester United at Stamford Bridge on Sunday.

The Moroccan came off the bench to score the winner on Wednesday night at Vicarage Road, helping his team-mates swat aside the persistent Hornets, who had earlier cancelled out Mason Mount’s opener with an effort from Emmanuel Dennis.

Ziyech speaking in an interview reflected on being the difference-maker once again.

He said, “This is one of the reasons why the coach brought me on so I have to be happy to score that decisive goal,’ he told chelseafc.com.

“It was a difficult game from the beginning, not easy from the first minute, and it was not our best day but the most important thing is we got three points.

All the other stuff is better to forget.

Reacting on the medical emergency in the crowd that resulted to delay of the second half after a spectator suffered a cardiac arrest, the Moroccan said everybody was shocked at the incident.

Thankfully, the Watford supporter left the ground for hospital in a stable condition and play resumed.

On how Chelsea was able to stand their ground and came out with the victory, Ziyech said the team never quit.

“You can see from the beginning that even when we found it difficult, we never quit.

“We were always trying to find the spaces and we knew our moment would come.

“That’s also one of the strengths of this team because no matter if we play good or bad, we always find a way to score.

“During a season, you know you can’t always play good but the most important thing when you don’t is to win the games and today was a good example of that.

“It’s always good to stay top of the table and I think we also deserve to stay there right now.”