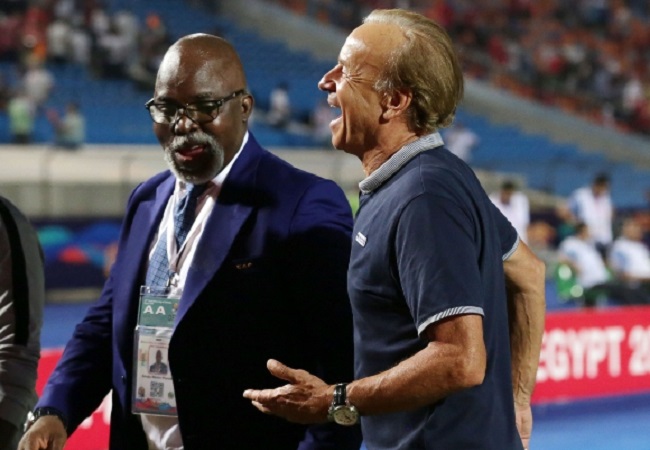 The president of the Nigeria Football Federation (NFF) Amaju Pinnick met with the Sports Minister to discuss the future of the Super Eagles coach Gernot Rohr.

NFF President has said that any decision the association takes on embattled coach will be in the interest of Nigerians.

Pinnick said this after he met with the sports minister Sunday Dare in Abuja, where they discussed the future of Rohr.

Pinnick had earlier debunked rumours that the NFF had sacked the German. However, he did confirm that his position would be reviewed and discussed with the sports minister.

And following the meeting on Thursday evening, the FIFA council member hinted that Rohr would be sacked soon.

“We have discussed with the Minister. We have a new direction. I have to discuss with my Executive Members. I will also come back to give feedback to the Minister.” Pinnick told the media.

“We are working in a close harmony with the sports ministry. We don’t want to hurt Nigerians. We are looking at our decision from an objective perspective. Trust me, whatever we are doing, it will be in the interest of the country.

“We have looked at all the documentation. I can assure Nigerians we will have a clear direction soon.” He added.

Pinnick did not reveal if the NFF already has a replacement lined up. But former coach Jo Bonfrere had reportedly expressed his interest in the job.