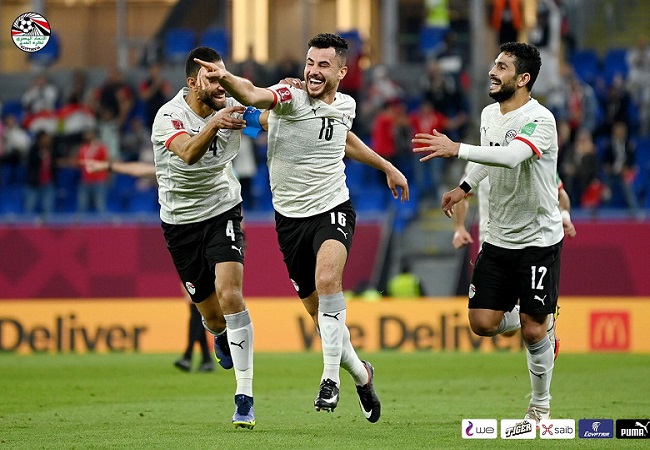 Egypt’s national team is set to face Algeria in the final stage of the Group D games on Tuesday night. The Pharaohs’ clash with their North African rivals Algeria is to determine who will advance as the leaders. The game will take place at Al Janoub Stadium kicking off at 19:00GMT.

The two teams are already qualified to quarterfinals claiming two victories over Lebanon and Sudan. The latter two waved goodbye to the tournament in Qatar after failing to bag any points.

“It’s the right of all teams in the tournament to dream of winning the title. We have that dream too. But our focus now is preparing for the Algeria game.” Egypt’s coach Carlos Queiroz said after the 5-0 victory over Sudan in the 2nd round of Group D games on Saturday.

Egypt started their Arab Cup campaign with a narrow 1-0 win over Lebanon before routing nine-man Sudan 5-0, while Algeria defeated Sudan 4-0 and snatched a 2-0 win over Lebanon to share the group’s lead with the Pharaohs with six points.

“I am very excited about tomorrow’s match. And it will be a pleasant game for football fans and our supporters. And we are looking forward to it.” Queiroz said during the pre-game press conference.

“We still have small mistakes. But we have to work hard and avoid repeating mistakes in such big games.”

Egypt’s coach Queiroz had explained that his “target from the FIFA Arab Cup is to allow players to gain more experience while playing against tough opponents.”

With some of the players that Queiroz has chosen to place his faith in falling behind expectations, it remains to be seen whether the former Real Madrid boss will actually effect change in the team’s performance.

Two of the new faces, wingers Ahmed Refaat and Hussein Faisal, made their presence felt during the game with Sudan, with each player netting a goal.

Refaat, who plays for Future FC — a newly-promoted Egyptian Premier League club, drew first blood after four minutes with a sublime, scorching volley that is a contender for the goal of the tournament.

Faisal — who joined Alexandria-based club Smouha after being offloaded by Zamalek in the summer transfer window — provided an assist for Mahmoud El-Wensh after dribbling past a couple of challengers near the byline in the first half and finding the net with a simple tap-in after the break.

Egypt will continue missing Ahly’s defensive midfielder Hamdi Fathi in their showdown with Algeria after he sustained a facial injury in the Lebanon game.

Inspirational playmaker Mohamed “Afsha” Magdi is also suffering from a muscle strain and will be rested from the game.

On the other side of the field, Algeria’s coach Madjid Bougherra also believes that the game against Egypt will be a difficult mission for the two teams given the long and storied history between them.

“The game against Egypt will be difficult mission for the two teams. But we will play to win.” Bougherra said in a press conference on Monday.

“The Arab Cup is a good test run for Algeria ahead of the coming competitions.” The Algerian coach added.

The two sides have not met since Egypt’s 4-0 victory over Algeria in the 2010 African Cup of Nations that took place in Angola, when the Pharaohs claimed the title.