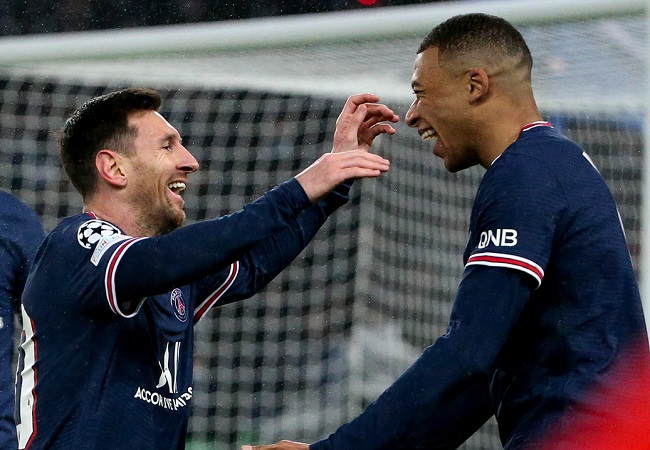 Defeat to Manchester City in their penultimate group-stage match meant PSG were guaranteed to finish in second place in Group A. But Brugge needed a win to confirm their place in the Europa League.

Yet it was the hosts who started by far the strongest with Mbappe scoring twice in the first seven minutes.

First, the France international coolly side-footed home from close range to become the youngest player to reach 30 goals in the Champions League before doubling his tally for the night with a stunning volley from an Angel Di Maria dink over the top.

Messi netted his first of the game on the 38 minutes with a curling effort from the edge of the box, having previously been denied by Brugge goalkeeper Simon Mignolet.

Brugge threatened at the start of the second half. And they were rewarded with a goal Mats Rits reduced the deficit on 68 minutes. But Messi got a fourth for PSG from the penalty spot 14 minutes from time.

In the other Group A game, RB Leipzig scored in each half to beat already-qualified Manchester City 2-1 in the Champions League, booking a spot in the Europa League and snapping the English club’s 14-game unbeaten run against German teams in the competition.

With interim coach Achim Beierlorzer on the bench after the sacking of Jesse Marsch on Sunday, Leipzig secured third spot in Group A on the final matchday ahead of Club Brugge, who lost 4-1 at second-placed Paris St Germain.

City, with seven changes to the team that beat Watford in the Premier League at the weekend, defended high but Dominik Szoboszlai managed to break clear and latch onto a Konrad Laimer ball to round goalkeeper Zack Steffen in the 24th minute.

The hosts came close to a second but first Emil Forsberg’s shot was blocked by Steffen and a little later the City keeper made a reflex save to deny Andre Silva from point blank range.

His Leipzig counterpart Peter Gulacsi responded with a superb save of his own in the 40th, getting his fingers to a Phil Foden shot to direct it onto the post.

City looked livelier after the break but Leipzig scored against the run of play with Silva’s well-placed shot in the 71st after City clumsily lost possession in their own half.

The visitors did respond six minutes later with Riyad Mahrez’s diving header for his fifth goal in six Champions League games but their comeback was short-lived with Kyle Walker being shown a red card for kicking Silva from behind.