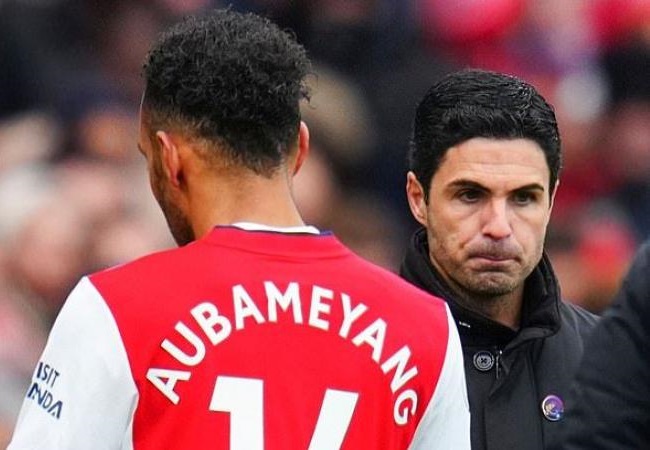 Pierre-Emerick Aubameyang was stripped of Arsenal’s captaincy in December after Mikel Arteta ran out of patience with the striker following his latest disciplinary breach.

Aubameyang hasn’t featured for the club since the decision. Hence, the 32-year-old has been offered to a number of European and Premier League clubs, with Arsenal desperate to discard of the Gabon striker.

To make matters worse for Aubameyang, Arsenal’s form has been impressive without the former Dortmund striker and the Daily Mail say that’s convinced Arteta to sell the forward.

It’s claimed Arsenal are so keen to get rid of the Gabonese international they’re willing to sell to a direct rival. And he’s been offered to a number of clubs in England and abroad.

Also Read : MIKEL ARTETA HINTS ON SELLING AUBAMEYANG IN JANUARY AFTER FALL OUT

However, Arsenal may struggle to sell Aubameyang because of his reported £300,000-a-week wages.

Aubameyang has 18 months left on his deal at the Emirates. And few clubs would be willing to meet his wage demands. Particularly as he’s in the twilight of his career.

Should Arsenal decide to get rid of Aubameyang this month, they may have to pay for part of his wages in order to allow him to leave on loan.

Aubameyang is currently on international duty with Gabon for the 2022 Africa Cup of Nations (AFCON).