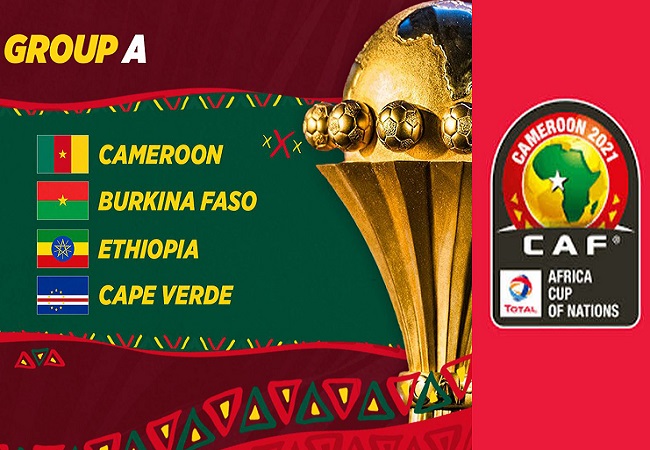 Having been delayed a year by the coronavirus pandemic, the 33rd Africa Cup of Nations (AFCON) will get under way in Cameroon on 9 January. Twenty-four teams will be in the competition with 52 games over six venues across the country of Samuel Eto’o.

Through BBC Sport Africa, Africa football specialists gave an overview of Group A, which includes hosts Cameroon, Burkina Faso, Ethiopia and Cape Verde with a preview of each team.

Three years ago Cameroon exited the Nations Cup in the round of 16. And the ultimate goal for the hosts will be to scoop the continent’s most coveted silverware for a sixth time.

Antonio Conceicao has been in charge since September 2019. And the Portuguese coach adores controlling games from kick-off. Under him, Cameroon has reverted to a high-intensity game where the wing-backs are expected to defend and attack in equal measure.

The Indomitable Lions’ force is in midfield, where they’re laced with talent that can dominate possession and dictate the tempo of the game. Napoli’s Andre-Frank Zambo Anguissa looks the star man with his inherent aptitude to pick out passes in tight spaces and the energy he brings to the pitch.

Despite only returning to action in November after a lengthy suspension, Ajax goalkeeper Andre Onana is undoubtedly first-choice keeper. And his heroics during the 2022 World Cup qualifier against Ivory Coast have no doubt sealed his spot.

Also read : ATTENDANCES TO STADIUM DURING 2022 AFCON LIMITED BY CAF

Absent in 2019, Burkina Faso want to forget the last Nations Cup tournament in Egypt and have spared no effort.

Like their three opponents in Group A, Burkina Faso are well-placed to reach the round of 16, before surfing the rest of the configurations which will be presented during the finals.

Brought to the tournament by a young generation of players including Herve Koffi, Edmond Tapsoba, Issa Kabore, Bertrand Traore and Gustavo Sangare, the squad will do everything to have no regrets.

Apart from their quality, the Stallions will also hope for an improved mental approach – having brought in a psychologist earlier this year to help the team focus on achieving its goals.

After nine years away, Afcon 2022 is a great opportunity for coach Wubetu Abate and his squad to show what Ethiopia, one of the founding members of Caf, has to offer.

Abate is the mastermind behind Ethiopia’s eye-catching one-touch football. Midfield maestro Shemelis Bekele and captain Getaneh Kebede lead the squad while young star Abubeker Nasir, the top scorer in the 2020-21 Ethiopian Premier League, is one to keep an eye on.

Wubetu was consistent in his style of play in the World Cup and Nations Cup qualifiers with a 4-3-3-line up and Nasir, combined with Kebede and attacking midfielder Dawa Hotessa, might pose a danger for opponents.

Advancing to the round of 16 would be a big leap for Ethiopia, a team still shaping itself under Wubetu. But it will delight millions of Ethiopians in and outside of the country to watch their team play in the continent’s flagship competition.

Cape Verdean football transformed from 2013 onwards. We had our first experience at Afcon, which made our football known throughout Africa and in Europe too.

The football federation had a project. And when we started, Cape Verde was 126th in the Fifa rankings and we went on to be 27th. We’re proud of the work that the federation has accomplished until now.

I hope that everything goes well for our team. We have good players, although many are still young and have little experience in Afcon. Our coach is very smart, experienced, and knows African football well. The group is strong and we a good collective – organised defensively and with a powerful counter-attack.

Cameroon is the favourite team. And we and Burkina Faso will have to fight for a place in the next round. Ethiopia is the weakest team in the group but deserves our respect.

I believe that we will get through the group stage but depending on the opponents in the last 16, we can go a little further. I am confident.