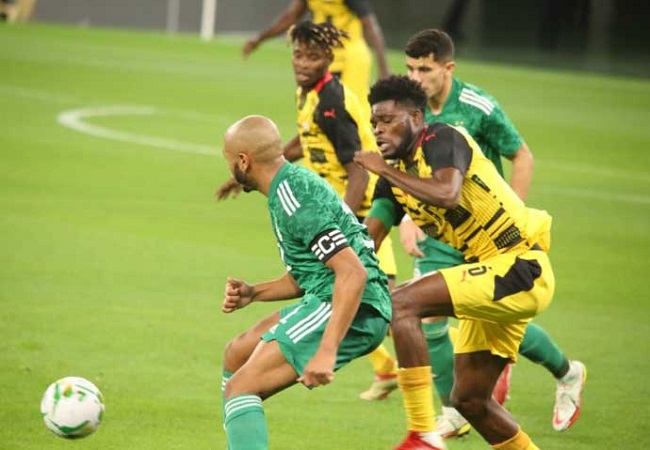 In their capacity test ahead of 2022 AFCON, Ghana lost to Algeria on Wednesday in a pre-AFCON friendly in Doha. The African champions thrashed the West African powerhouse 3-0 as warning for the upcominp AFCON.

Adam Ounas put Algeria ahead in the 8th minute to see the Fennecs take a one-nil halftime lead.

Defender Jonathan Mensah then turned the ball into his own net in the 74th minute on the near left post as he attempted to clear Youcef Atal’s cross that the Nice player swept in from an acute angle.

Veteran Islam Slimani completed the two-time champions good day at the office in the 79th minute when he turned in fellow second half substitute Farid Boulaya’s cross after they came on in the 63rd and 71st minutes respectively.

The result is certainly not what coach Milovan Rajevac needed ahead of their big Group C showdown against Morocco on January 10 at Stade Omnisport in Yaoundé.

Meanwhile, The Black Stars are due to arrive in Cameroon on January 7 from Qatar.

The four-time AFCON Champions and 2015 losing finalists head to Cameroon seeking their first triumph since 1982.

With the latest win, the North African giants remain unbeaten in their last 34 matches, having secured an incredible 26 victories and eight draws.