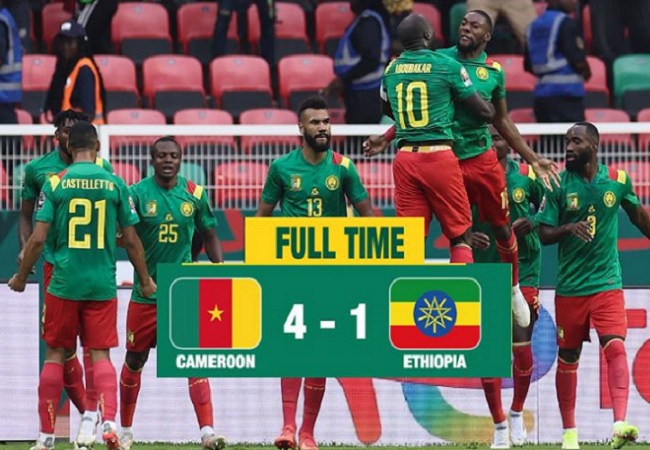 Hosts Cameroon came from behind with a brace each from team captain Vincent Aboubakar and Eric Maxim Choupo-Moting to book a place 2022 Africa Cup of Nations (AFCON) round of 16.

The indomitables Lions dominated Ethiopia with 4-1 win at the Olembe stadium of Thursday afternoon.

Also Read : “ALL THE PLAYERS ARE READY FOR THURSDAY’S MEETING” – CAMEROON COACH AHEAD OF CLASH AGAINST ETHIOPIA

Vincent Aboubakar, scorer of two goals in Cameroon’s opening day win over Burkina Faso, strengthened the home side’s position with a quickfire double in the second half.

It was at this point that Boro man Siliki was introduced, a 56th minute substitute for Eric Maxim Choupo-Moting, and Cameroon soon added to their tally with Ekambi’s second of the game.

The result all but secures progress for Cameroon. And it may be decided when Group A’s other sides meet later this evening. The match sees Burkina Faso play Cape Verde, the latter of whom are next up for the Lions in Olembe on Monday.