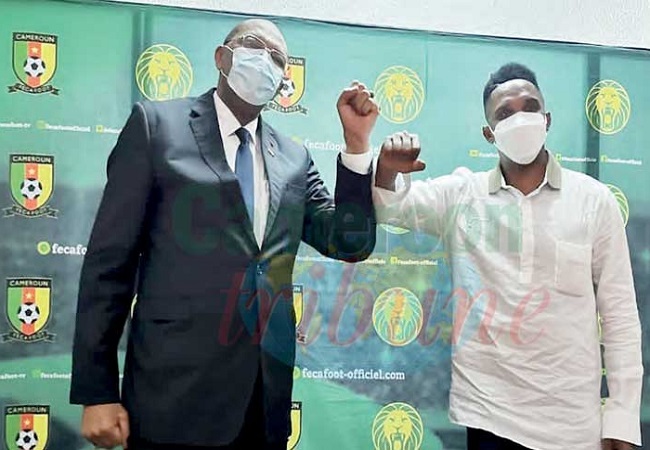 The Cameroon Football Federation (FECAFOOT) has just experienced a smooth transition of power in its presidency position. The former interim President of the federation, Seidou Mbombo Njoya publicly handed over powers to his successor, Samuel Eto’o Fils. This was in ceremony held on Monday, January 17, 2022 in the conference room of FECAFOOT in Yaounde.

It should be recalled that Samuel Eto’o won Seidou Mbombo Njoya in the presidential election which took place on December 11, 2021 in Yaounde.

The former President presented his best wishes to the incoming team while urging the staff to work hard to support the policy and objectives of the new President.

On the other hand, Samuel Eto’o, after thanking his predecessor, reiterated his determination to see a new beginning of football in peaceful environment. He has equally urged his staff to be assiduous; a virtue which he holds dear to his heart.

Before he officially took office yesterday, the new President had effectively been carrying out his duties since his election.

Apart from holding key meetings to ensure the progress of Cameroon’s football in general, the former Indomitable Lions’ player has been at the forefront of the smooth holding of the Africa Cup of Nations (AFCON).