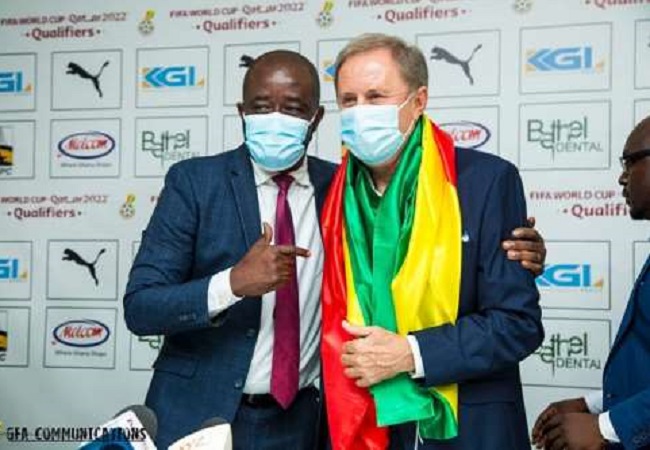 Ghana’s catastrophic exit from the ongoing Africa Cup of Nations (AFCON) has aroused criticisms from all parts with regard to the underperformance from the Black Stars. However, Ghana Football Association (GFA) president, Kurt Okraku, has defended Black Stars’ coach Milovan Rajevac’s selections at the tournament.

The Serbian trainer was hugely criticized for his matchday squad at the tournament. But Kurt insists that the 28-man team was the best the coach could fall on during the time of the selection.

The GFA president dared critics to name three players who could have played better than those that were invited by coach Milovan Rajevac.

“I have heard a lot of commentary on coach Milo’s selection. And I wonder why it is so. Every player selected deserved the call-up. Milo selected the best Ghanaian players around.” Said Kurt Okraku on local media.

“I will be surprised if you give me three names who deserved call ups but were not called…” He added.

The GFA president also commended the players for the passion and dedication exhibited during the games.

According to him, the players were more focused on winning the cup and does not recall a single moment they thought of bargaining for their money.

“I have never worked with a group of dedicated Black Stars players as I had in Qatar and Cameroon… Truth must be told. This is a group of players who didn’t speak about money…” Kurt said.

Ghana bowed out of the tournament after suffering defeats to Morocco and debutants Comoros Island. Ghana’s only point was in the 1-1 draw against Gabon.

The Black Stars are expected to arrive in Ghana on Thursday.

Meanwhile, the leadership of the association have been summoned by Ghana’s Ministry of Youth and Sports to answers questions over the team’s poor performance.