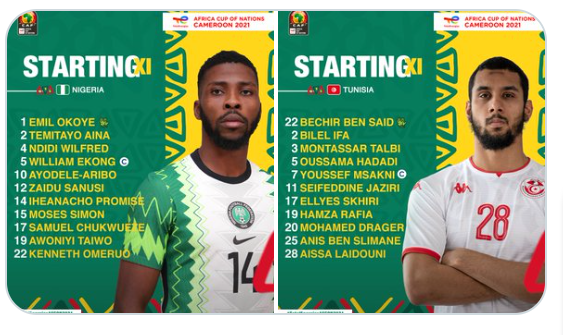 Nigeria Super Eagles head coach Augustine Eguavoen has named the same starting line up he used in the first two Group D games ahead of the Round of 16 match against Tunisia.

The Super Eagles will continue their quest for a fourth Africa Cup of Nations when they play against the Carthage Eagles of Tunisia in the second Round of 16 game of the AFCON.

Eguavoen after making eight changes in Super Eagles 2-0 win against Guinea-Bissau, returned to his preferred Starting XI against Tunisia.

Ola Aina, William Troost-Ekong, Kenneth Omeruo and Zaidu Sanusi are in back in the defence in a 4-3-3 formation.

Only Troost-Ekong featured against Guinea-Bissau.

In midfield,Wilfred Ndidi, Joe Aribo and Kelechi Iheanacho will continue their partnership.

Taiwo Awoniyi will lead the attack flanked by Moses Simon and Samuel Chukwueze on the wings.