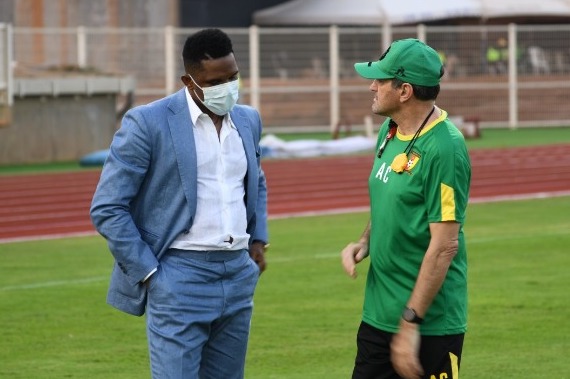 Fecafoot president Samuel Eto’o had a strong speech in the dressing room in front of the Indomitable Lions ahead of the Cameroon vs Egypt clash on Thursday at 19:00 GMT for the AFCON 2021 last semifinal.

Eto’o has been constantly near the Cameroonians since the start of the competition as he wants to see his country lift its sixth Africa Cup of nations.

Before and after each game, the all-time AFCON top scorer (18 goals) says something to the players to encourage them in continuing working hard to clinch the title.

And during his speech after Antonio Conceiçao’s men booked their ticket for the AFCON 2021 semifinal ahead of Gambia (2-0), Samuel Eto’o made it clear to the players that the game against seven times AFCON winners is going to be a ‘war’.

“With the same mentality, get ready because it will be a war! War guys!”, Eto’o told Vincent Aboubakar and teammates.

“This is how we should approach this game! The war !

“You can’t miss this opportunity to see this light… Impossible guys,”